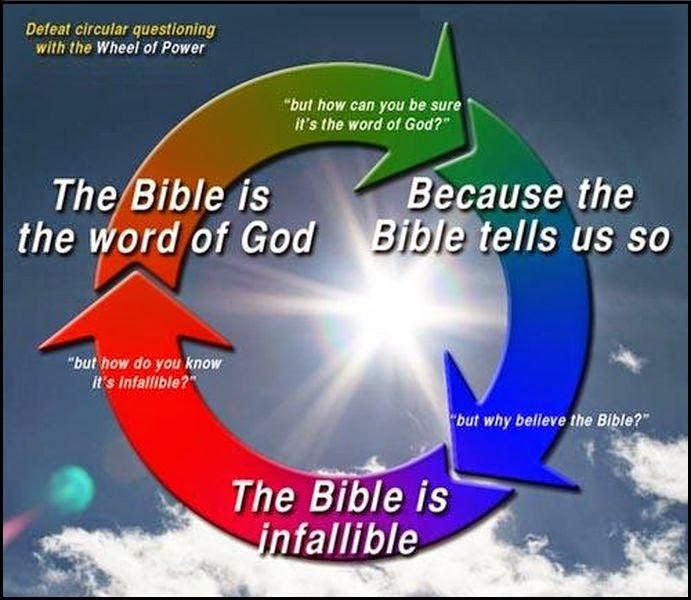 Firstly, as I mentioned in a previous post (Sye's Analogies), without God you don't get truth -  you just get brain fizz. So it's illogical to say that the Bible is not true, because you can't get truth without God.

Thirdly, some circles are unavoidable when you get down to core assumptions. In the Bible God swore by himself because their was no one greater to swear by. To illustrate this try proving that logic exists without using logic! For example, take the Law of Non-Contradiction (LNC) - you can't prove that this exists without assuming that it exists and using logic to prove logic - which is circular. But we can prove that the LNC exists by the impossibility of the contrary - if you look at what happens if you try and reason without it you end up in absurdity. If the LNC were not true we could also say that it is true and there would be no basis for objecting to that contradiction. 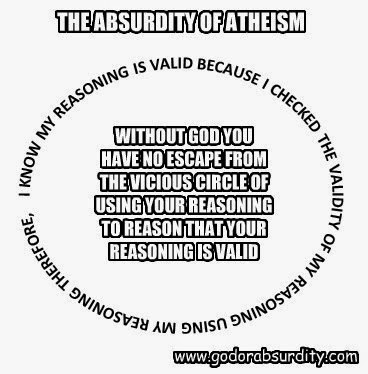 Here Jason Lisle has used an illustration of a man with a barrel of gunpowder going round in a circle. When he lights the fuse it will circle around him and blow himself up. The biblical circle is not a vicious circle but a virtuous circle because it is not a simple circle. The circle transcends a mere vicious circular argument by acknowledging revelation from God. It transcends this earthly plane and thus breaks free from the circle. God has revealed certain things to us so that we can know them for certain (such as that He exists).

God is true because the Bible says so AND because of the impossibility of the contrary. Without God truth doesn't make any sense and those who deny God's existence have their worldview reduced to absurdity.

Is circular reasoning always fallacious? The criticism that we have made a logical fallacy is borrowing from the Christian worldview where logic makes sense. In all non-biblical worldviews logic cannot be accounted for. The fact that the unbeliever expects us to play by 'the rules of logic' exposes the fact that in their heart of hearts they do know God because without God logical rules make no sense at all. Evolution doesn't give us logic - just brain fizz.

Another analogy similar to the unbelievers circle blowing itself up is that by arguing against God they are cutting off the branch they are sitting on. Check out the following humorous video to see someone doing exactly that! https://www.youtube.com/watch?v=4RQfgbbPrxU.

The bottom line is that arbitrary circles are fallacious but the Christian position is a non-arbitrary circle that provides the only foundation for logic and knowledge is therefore not fallacious.
Posted by Unknown at 1:47 PM