Why Science is Always False 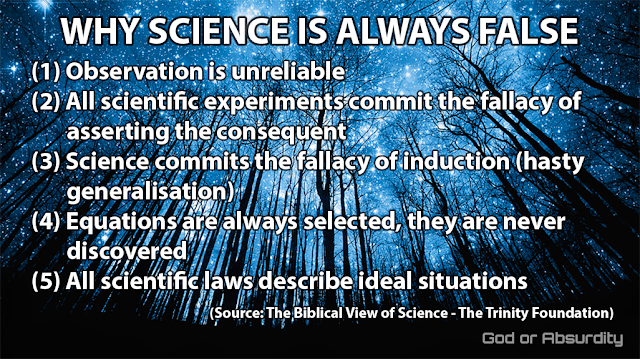 Further information on this topic is here  The Trinity Foundation - The Biblical View of Science.

The Biblical View of Science explains 5 problems with science:

Does this mean I don't believe that we should use science? No, I'm not saying that. It's a very useful tool for making predictions and helping us make technological advances. The point is that science (i.e. secular scientists - science is not a living being so can't tell or give us anything) cannot give us truth in an epistemic or philosophical sense. Science (secular scientists) can never tell us the true nature of the universe through the scientific method. So to reject the Bible based on 'science' is utter foolishness.

I made this meme based on the above things... Related to this whole topic it's worth checking out the following 'banned' TED talk by Rupert Sheldrake - I don't agree with everything he says but the part about the constancy of the speed of light makes the message worth listening to
http://www.collective-evolution.com/2013/04/10/banned-ted-talk-rupert-sheldrake-the-science-delusion/.

To those who would try and use science as an argument against the Bible they first need to account for the foundation of science - the uniformity of nature. Why is the future assumed to be like the past? The Bible makes sense of the uniformity of nature but without God it cannot be made sense of and must be assumed. If it is true that the future will always be like the past then by that logic you've just proved that I will never die because in the past I've never died. Other people have died - but they aren't me.
Posted by Unknown at 3:06 PM