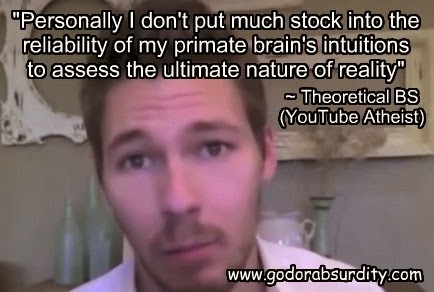 I’ve summarised TBS’s argument and made it bold inside // marks and responded below. My responses are below each of TBS's argument.

But why does the universe act in a logical way?

//Things just behave the way they do.//

But why? This is begging the question.

I think this is what he is saying. If that is what he believes then the question is - could the universe have existed and not existed at the same time and in the same way BEFORE people existed?

// Christians can’t prove that the law of non-contradiction is absolute.//

But we can! God cannot lie (Hebrews 6:18), and is logical by His very nature. God cannot deny himself (2 Tim 2:13). God cannot contradict himself because contradictions amount to lying.

God exists for His glory, and we don't need to know why or how something exists to know that it does exist. If you mean though why God does God exist in terms of what caused him to come into being - God is eternal and has always existed. His existence is the necessary presupposition to make sense of anything.

Not true. See my website www.godorabsurdity.com for proof God exists, and proof that you can't know anything without God.

//God’s existence, qualities and nature are assumed by the Christian//