Why I Left Christianity and Became a Satanist - Atheistic Satanism 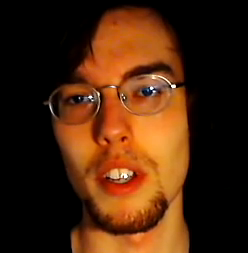 Today I came across this video, and felt it was worth sharing and reviewing. The 15 minute video is by the YouTube user "Styxhexenhammer666" who claims to have been a Christian in the past and then became an atheist before eventually converting to Satanism. (He uses the term 'Agnostic Independent Satanist' to describe himself.) He says that he lost his faith when he was at college as a result of his independent research. This neglects to take into account the overall influence of being at a secular college where teachers and information sources are wrongly assumed to be neutral. (Total philosophical and intellectual neutrality is in reality impossible - we all have biases and the same thing goes for all books and textbooks - information is always included, excluded, and interpreted in the light of peoples presuppositions.)

One objection he has to Christianity is the false claim that it's done far more harm than good in the world and caused wars. In reality nearly all wars down through history have been non-religious wars. (Is Religion the Primary Cause of War?)

And of course no diatribe against Christianity would be complete without mentioning the Flat earth myth, which is dropped into the mix along with a number of other false assertions. (Even secular Wikipedia agrees that there never was a time when it was commonly believed that the earth was flat - Myth of the Flat Earth)

I watched some of his other videos too and realised that he does not believe in a literal Satan, but sees Satan and demons as being symbolic forces in the world, so he would seem to fit into the category of Atheistic Satanism. (Also known as LaVeyan Satanism.) If I've understood him correctly he believes in a lot of the things that the Church of Satan believes (founded in 1966 by Anton LaVey) but objects to the idea of having to join an official group and pay a $200 joining fee in order to call himself a Satanist. On one of his videos he boasts that he's become something of a spiritual guru responsible for helping convert so many people to Satanism that he says he's lost count of the number of converts.It was interesting to hear him say in the above video that he basically feels he can make up his own morality and his own truths, and that this makes him a god in a symbolic sense. This is exactly the lie that Satan told Eve in the Garden of Eden in Genesis 3:5 - "you shall be like God".  He also talks about being expunged of the "false guilt" he once felt. The Bible talks about false teachers with seared consciences like this man in 1 Timothy 4:1-2:

1The Spirit clearly says that in later times some will abandon the faith and follow deceiving spirits and things taught by demons. 2Such teachings come through hypocritical liars, whose consciences have been seared as with a hot iron.

The problem with Styxhexenhammer666 is that he's got no way of knowing anything to be true in his worldview. He admits that the problem with trying to find truth by yourself can lead to error, but does not seem to think this is a big problem. In reality it's a massive problem. Like a dog that is not on a leash he may feel free, but this kind of freedom is extremely dangerous, and ultimately leads to destruction.
In another video of Styxhexenhammer666's called 'Proof that God does not exist' he argues for the theory of an eternal oscillating universe, and the multiverse theory which posits an infinite number of universes. He also brings up the usual accusations that atheists bring up against God related to God supposedly being immoral - but does not attempt to account for where he gets absolute morality from, other than his own flawed logical mind.

To conclude with, Styxhesenhammer666 is obviously a very intellectual young man, and I wonder if things would have been different for him if he'd been exposed to a more intellectually rigorous form of Christianity that could have given him real answers to the deep philosophical and intellectual issues of faith. In my opinion, his story is a reminder to the Church of the urgent need to teach apologetics alongside the Gospel in order to evangelise and disciple effectively, as we are called to do.

For a great article on Satanism and how it is a natural outflow from atheism and Darwinian evolution see Atheism, Satanism, and Dawkins.