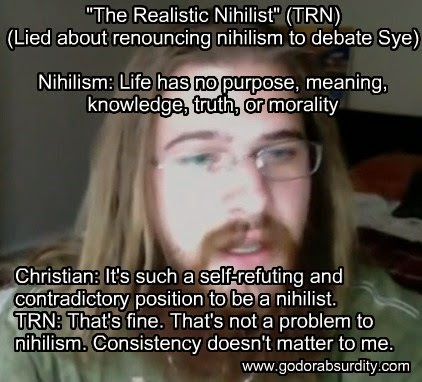 In the video below the "The Realistic Nihilist" tries to debate Sye Ten Bruggencate. He even agrees that he is an epistemological nihilist, which means that we can't know anything. But debates presuppose knowledge, and so Sye challenges him that if he wants to debate him he must renounce his nihilism. At first he isn't willing to do this and wants to temporarily adopt the evidentialist worldview, but Sye points out that the debate is over because he has abandoned his nihilism and is unwilling to try to defend it.

Then later he tries to come back and agrees to renounce nihilism. He clearly says that he has decided to renounce it for the rest of his life, and says he will change his YouTube name the next day. (See the video below at 49:50 to 50:50 and the transcript).

Sye: But are you a nihilist or are you an evidentialist?

The problem is that now, 6 months later, he still hasn't changed his YouTube name - he's still using the name 'The Realistic Nihilist'. Just 1 week ago he posted another video ranting about how stupid BibleThumpingWingnut is. (He's a Christian and presuppositionalist). (See TRN rant here: Bible Thumping Wingnut is...)

"Realistic Nihilist" - you need to repent of your self-refuting worldview and stop lying. Stop lying to other people, stop lying to yourself, and stop lying to God. I agree with what BTWN said in the bottom video - I don't have anything personally against you - you're a smart guy, but you've adopted a very bad philosophy.

('The Realistic Nihilist makes it to #1 due to his absurd worldview that doesn't care about being self-refuting, contradictory, and inconsistent - those things are "not a problem to nihilism" because he doesn't try and defend it - because he can't - it's too absurd. Nor can he say that Christianity is wrong  and yet he has the nerve to rant about how stupid BTWN is.)