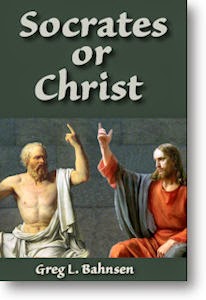 Anything by Bahnsen is worth the read and this book is no exception. Bahnsen clearly shows the two antithetical worldviews:

1. Socrates - the secular worldview that rejects God and puts man as the ultimate authority. In this view sin does not exist - it is merely due to a lack of knowledge. Man's mind is elevated to the level of divinity and knowledge can be gained by a neutral examination of the evidence.

2. Christ - the biblical worldview that puts the authority of God's word as the ultimate authority. Sin has influenced the whole of humanity, and so neutrality is impossible. Knowledge is grounded in God and revelation from Him.

All worldviews ultimately come under one of these two categories. Socrates or Christ, or as Sye Ten Bruggencate puts it - God or "notGod".

The fact that the book has about 200 biblical references in the footnotes is testimony to the fact that Bahnsen's worldview is thoroughly grounded in scripture.

Bahnsen explains what biblical presuppositional apologetics is, and shows why the Socratic method fails to be an adequate foundation for knowledge.

"Prejudice, Pragmatism, and Presuppositionalism" is included with, and follows on from the first book, and it fits well with it. In this second book Bahnsen closely examines 3 examples of some of the best men of modern secular philosophy, and shows how they all fail miserably to account for knowledge. Those three men are John Dewey, Ludwig Wittgenstein, and John L. Austin.

Below is a quote from Wittgenstein that I thought was a gem worth sharing, as it highlights the foolishness of grounding ones knowledge within oneself. 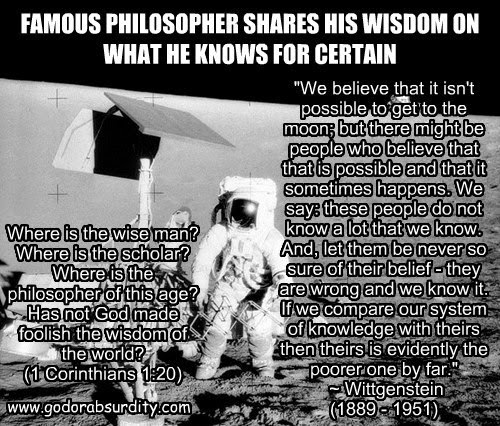 Of course the mistake Wittgenstein made in what he said (as quoted above) was an easy mistake to make at the time he lived, but it is a great example of the danger of speculating on things that one cannot really know for certain, and then saying you you "know" it, even if the vast majority of people also agree with you. (And without God, one cannot know anything for certain.)

Both Bahnsen books show the foolishness of philosophy that is grounded in human traditions rather than Christ.