Alex Botten vs Surfer Brendan (Me) - Morality and Rape

A few days ago I made the following meme: 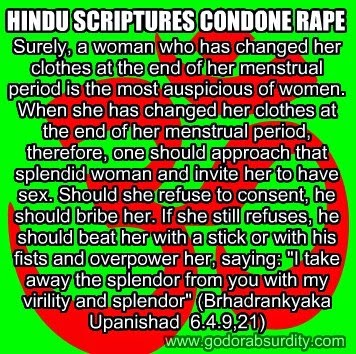 Alex Botten responded to this meme after I posted it on Google+, and after avoiding my questions about how he accounts for objective morality (by which he is attacking the Bible), eventually he made this YouTube video:

"Surfer Brendan, Please Explain your Position" (2 min 32 sec - Update: The video seems to have been taken down.)

(For more on Hinduism, and another similar verse to the one above where Hindu gods are said to have raped someone, see my website page on Hinduism here:
http://www.godorabsurdity.com/hinduism.html)

The discussion between Alex and I has already gone back and forth on Google+, and it took a long time for Alex to admit that he doesn't believe in objective morality. I can understand him being reluctant to admit that because it undermines his whole argument against the Bible's morality. (For more on morality see my blog post "Proof God Exists From Morality". The video on that blog post shows the massive problems with abandoning objective morality.)

As for Alex's explanation of morality being whatever causes the most good and least harm for people - it is totally begging the question - who decides what is causing the most good? A rapist could argue that the most good is being caused when he rapes women because he's spreading his superior genes, and Alex would have no real grounds for any rational objection to that because he doesn't believe in objective morality. I'm sure that he'd say that nearly everyone agrees that rape is wrong - but so what? This is the fallacy of appeal to the majority. Majority opinion does not determine right or wrong. If the majority of Germans supported Hitler's regime would that make it right? If the majority of people professed to believe that God exists, would that then prove that God exists? Alex says he would have fought against the Germans in WWII - but upon what basis does he know that Hitler was wrong in what he was doing? Hitler would argue that in the long term his regime would bring about the least suffering for people by wiping out the weak - isn't that what evolution teaches is the way to advance evolution?

I usually don't take the time to go into these kinds of issues with professed atheists, because everyone interprets things based on their presuppositions. So no matter what I say, Alex will almost certainly not accept it, but will interpret the Bible how he wants to - which usually is to try to take verses out of context and make them look as bad as he can possibly make them. But to show Alex, and other professed atheists that I do actually know the Bible and do actually have good reasons for what I believe, I've written a response to Alex's objections. I also hope that it will be helpful for other Christians who get the same kinds of objections and wonder how to respond.

2 Problems With Rape (According to Alex):

1. Rape victim being forced to marry her rapist

2. Rape victim stoned to death if she doesn’t cry out while being raped in the city

Examination of the Alleged Problems

1. Rape victim being forced to marry her rapist

Deuteronomy 22:28–29 “If a man meets a virgin who is not betrothed, and seizes her and lies with her, and they are found,   then the man who lay with her shall give to the father of the young woman fifty shekels of silver, and she shall be his wife, because he has violated her. He may not divorce her all his days.”

To understand the reason behind this law, it is necessary to point out a few details. First, the Hebrew word here is simply the word “to have sexual relations with”; some English translations simply interpret this as “rape.” In the ancient world, women were so closely guarded by their families that it is possible that in this instance, it is not rape at all, and that the woman was willing. Furthermore, even in the case of rape, the woman might well demand that the man marry her because she would be unmarriageable. See 2 Samuel 13:1–22 for an instance where a rape victim demanded marriage. [Amnon raped Tamar, and Tamar demanded that he marry her, but Amnon refused. This event was not condoned by God, and the Bible sometimes records events that God did not condone but expressly condemned either in the passage or elsewhere in the Bible.]

Additional thoughts from me:

- The text does not say rape.

- In this case it would be an act of mercy for the man to be forced to marry her. So the man is being forced to marry the woman – not the other way around. It is quite possible (probable?) that if the woman did not want to be married in this situation then she did not have to agree to the marriage.

- Back then there was no social welfare system like we have today – although the tithing system did also provide for the poor. So to be unable to marry, for a woman was a harsh punishment in a time when men were the main bread-winners.

2. Rape victim stoned to death if she doesn’t cry out while being raped in the city

Deuteronomy 22:23–24 “If there is a betrothed virgin, and a man meets her in the city and lies with her,   then you shall bring them both out to the gate of that city, and you shall stone them to death with stones, the young woman because she did not cry for help though she was in the city, and the man because he violated his neighbor’s wife. So you shall purge the evil from your midst.”

Like the above, this law uses the word for “to have sexual relations with”; some modern translations assume the meaning “rape” but this is not in the original. This refers specifically to engaged women (in the ancient world engagement was as legally binding as marriage and required a divorce to cancel) who are inside a town. As closely-packed as ancient towns were, she would be helped if she screamed; since she did not scream, there is an assumption that it was not rape, but adultery.

Furthermore, why is the atheist concerned? Two atheistic evolutionists wrote a book with the horrifying claim that men rape for evolutionary reasons [1]—one of them squirmed in an interview to justify why rape should be considered wrong under his worldview. [2]

Further thoughts from me:

- So again, this is not clearly even talking about rape, and these are the two most problematic “rape” texts that Alex has been able to find. Neither of them are clearly even about rape when we look at the context!

- Above I’ve used the ESV, but the NIV brings out the more happenstance nature of what seems to be inferred, rather than it being actual rape. It says:
“If a man happens to meet in a town a virgin pledged to be married and he sleeps with her,” (Emphasis mine).

- In the OT the death penalty was prescribed for adultery – although there is not even one case in the Bible where this was actually carried out. This was the maximum possible penalty, but the OT laws allowed for contextual considerations to be taken into account. For example there needed to be at least 2 witnesses.

According to Wikipedia's Crime and Punishment in the Bible article:

There is some question as to whether the death penalty was invariably or even usually implemented in ancient Israel, or whether this was even the intention of the Tanakh (c.f. Numbers 35:31). "It must be noted that the death penalty might also indicate the seriousness of the crime without calling for the actual implementation of it in every case. In fact, there is little evidence that many of these sanctions were ever actually carried out in ancient Israel. Only in the case of premeditated murder was there the added stricture of 'Do not accept a ransom for the life of the murderer who deserves to die' (Num 35:31). . . . Traditional wisdom, both in the Jewish and Christian communities, interpreted this verse in Numbers 35:31 to mean that out of the almost twenty cases calling for capital punishment in the Old Testament, every one of them could have the sanction commuted by an appropriate substitute of money or anything that showed the seriousness of the crime, but in the case of what we today call first-degree murder, there was never to be offered or accepted any substitute or bargaining of any kind: the offender had to pay with his or her life".[26] It is also of note that the Bible required at least two or three witnesses to convict someone of a crime, so executions would be rare under such a strict requirement. [27]

- To those who have a problem with the death penalty being too harsh – the question isn’t whether or not you “like” something or “dislike” it but whether it is right or wrong. And you can’t get objective morality without God, so Alex has no objective basis to criticize the Bible’s morality other than his own opinion which carries no more weight than the opposite opinion. In an evolutionary worldview rape could actually be right, because it could help ensure the survival of the strongest and fittest.

- For more on a biblical view of the death penalty see this article here: http://www.apologeticspress.org/apcontent.aspx?category=7&article=683.

-This is a good general article discussing rules and laws in the Bible: http://creation.com/bible-awful-rules (This article also mentions about how the OT laws stated the maximum possible penalty, and how it was not always rigidly applied).

- David committed adultery (with Bathsheba) but God was merciful and David was not put to death. http://www.gotquestions.org/death-penalty.html.

Further accusation from Alex – God is subjective in his moral decrees

This is just ridiculous. God is not merely arbitrary or merely having his own opinion as if God were a human being who is no better than us. God’s thinking is perfect – he is God! Morality within a biblical worldview is a reflection of the moral character of God – the one true God who is by definition perfect.

See my blog post A Response to Alex Botten on Rape.