Sye / Matt Debate - Why Are Both Sides Claiming Victory? 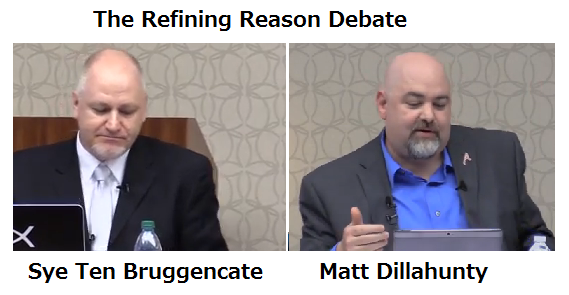 Professed Atheist: What do you mean? I thought Matt destroyed Sye's Christian presup nonsense. Are we talking about the same debate?!

It's been about a week since the debate between Sye Ten Bruggencate and Matt Dillahunty (May 31 2014), and one of the very interesting things I've noticed is that both sides seem to be claiming victory. Most Christians think that Sye did a great job and that he destroyed Matt's atheistic worldview. Most professed atheists (those that I've observed online anyway) seem to believe that Matt did a great job of refuting Sye's Christian worldview. Many have said that it's almost like we've watched different debates - the responses are that polarised.

To me this is not surprising. Nor will it be to Sye. In the debate he specifically said that he'd shown the absurdity of rejecting God, but that most people prefer absurdity because they prefer their sin.

The following article is a great one I found that talks about presuppositions and why they are so important: www.dtl.org/apologetics/article/dead-men.htm. The article includes the story called "Dead men don't bleed" (Or "Dead men do bleed" as they've called it). That story is a key story if you want to understand why both sides are claiming victory.

I agree with most of the article, apart from the bit about not really being able to prove our presuppositions - for proof God exists see www.godorabsurdity.com/proof-god-exists.html.

Also, if you have not yet seen Jason Lisle's video Ultimate Proof of Creation, then this is a must watch video that will help you to better understand presuppositions and how this affects our interpretation of everything we see - including debates between Christians and professed Atheists.


The Ultimate Proof of Creation