Why I'm Not an Evidentialist: A Response to J Warner Wallace 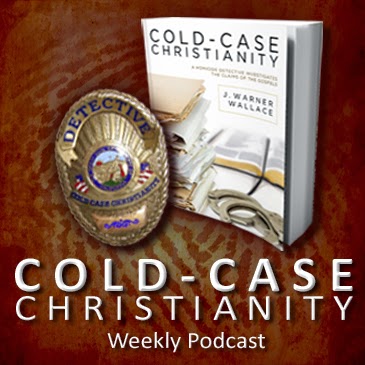 Recently I came across a podcast by J. Warner Wallace titled Why I'm an Evidentialist (Podcast).

The podcast is a response to this blog post.
For those who don't know, J. Warner Wallace is the author of Cold-Case Christianity, and he is a former cold-case detective. So I can understand why for him evidence is so important.

However, as someone who used to carry a badge of authority Wallace should also understand the importance of authority and that people are convicted not merely because of the evidence but by the weight of evidence being backed up by the authority of the person presenting it.

As Christians we need to stand on the authority of God's word and not get diverted into arguing the finer points of the evidence independently of the framework of the foundations of God's word. The unbeliever can deny the evidence all they want, but their argument is not with us, but their argument is ultimately with the one that we are representing - God. And according to passages such as Romans chapter 1 everyone knows that God exists but professed unbelievers are "suppressing the truth in unrighteousness" due to being in sinful rebellion against God. In the video 'How to Answer the Fool' Sye Ten Bruggencate tells a story that he calls "one cop town". The story is also here in 'Apologetics is easy - Believe your Bible' from 27:30 - 32:00 minutes. Please take the time to watch it because this story will help you to better see the difference between an evidentialist and a presuppositionalist. The story clearly shows the difference between an argument that is standing on the authority of evidence, and an argument that is standing on the authority of God's word.

Then from the 32 - 35 minute mark of the above video Sye discusses another analogy that a detective will be familiar with - a courtroom trial. God is not to be put on trial, but that is exactly what we are doing when presenting evidence to the unbeliever as if evidence alone was the real issue. It truly is "neglect of duty" to not stand on biblical authority as the foundation for your argument.

I believe that there is a place for evidence, but that it needs to be used carefully and within a presuppositional framework that understands that it's not just enough to throw evidence at an unbeliever without taking their presuppositions and worldview seriously.

I wonder if Wallace has done any study of presuppositional apologetics, and if so what videos he has seen and what books he has read. I wonder too if he believes in the inerrancy of Scripture, a literal Genesis, and 'Young Earth Creation' (YEC). My observation is that evidential apologists often do not believe in YEC and then things go wrong from there on. Also I've noticed that evidential apologists seem to misunderstand and misrepresent presuppositional apologetics - which is a shame.

Around the 31-32 minute mark of the podcast Wallace said: Again, they [Mormons] would say if you had the original text of the New Testament before it was corrupted you’d believe in the exact same kind of Jesus that we do – we’re  not creating a new form of Jesus,  we’re simply restoring what was lost.

So we have to, at some point at least, evaluate do we trust the person who is allegedly doing the restoration? That’s why for me it all comes down to the evidential case against Joseph [Smith]. (Emphasis added by me)

This shows a fundamentally different approach and foundation to faith than presuppositional apologetics. The evidential case against Joseph Smith would play a part in a presuppositional critique of Mormonism, but it is not what it "all comes down to". What it all comes down to is the authority of the Bible and the fact that Mormonism contradicts it - both the Old and New Testament - and leaves the Mormon in the position of believing internally contradictory things. They say that they believe the Bible and the book of Mormon, but in reality they don't believe the Bible - what Mormons believe is opposed to and contradictory to what the Bible teaches, and we need to show them that this is the case. I also found it telling that in the podcast Wallace did not even mention one Bible verse in his case against Mormonism. The 20 minute YouTube video 'Mormon Teens Surround Jeff Durbin at Mormon Temple' is an example of a good presuppositional apologist that is an expert at using a presuppositional approach with Mormons. When it comes to reaching Mormons or those from other religions presuppositionalists don't just say "we presuppose the Bible is true" and leave it at that as J. Warner Wallace seems to imply in his podcast. We do an internal critique and show them the inconsistencies within their worldview - whether it be Mormonism or any other cult or false religion.

Notice how in the above video Jeff Durbin stands on God's word and uses the Bible to show them where their beliefs deviate from the Bible that they claim to believe in. A key verse he uses is Isaiah 43:10:"You are my witnesses," declares the LORD, "and my servant whom I have chosen, so that you may know and believe me and understand that I am he. Before me no god was formed, nor will there be one after me.

And notice the reaction - one of the teens in particular is really excited and blown away - no doubt because he's never heard this Bible verse before - a verse that totally destroys a foundational doctrine of Mormonism - that we can become gods. So no wonder he reacts!

It's interesting too that J.Warner Wallace mentions Hugh Ross as an example of a well-known apologist. I wonder if this means that he agrees with Hugh in terms of 'Old Earth Creation' (OEC) - I suspect that he does. OEC is an unbiblical compromise position that abandons biblical authority. It accepts secular scientific theories about supposed 'billions of years' and attempts to somehow fit that into the Bible.

After doing a quick Google search I found this blog post by Ken Ham that shows that Wallace seems to believe that God used the Big Bang. Ken Ham's blog post says:

"In a recent Christian Post article (Big Bang Cosmology is Consistent with Scripture?), Wallace explains his position on the big bang:


"It turns out that the primary proposal is absolutely consistent with what we see in Scripture—that God has created everything from nothing and that moment of Creation is something that I see as having good evidence to support such a thing from Big Bang Cosmology."

The problem with Wallace’s position is that the big bang view requires billions of years, which contradicts Scripture! Of course, Wallace claims that the issue of millions of years “is a separate argument.”"

The issue of millions of years is not a "separate argument", and the issue of a literal 6 day creation is not a side issue. It gets to the very heart of the issue at hand - will we believe God's infallible word, or will we doubt God's word and accept the fallible word of man? Furthermore, the issue of 'millions of years' and evolution is one of the big reasons why western nations around the world are becoming more and more secular. And sadly many Christians and churches have also become much more secularized than they realize (See 'Ken Ham's Foundations: Relevance of Genesis' - it's a must-see video).

More reasons that are part of my case against evidential apologetics:
Video (9 min): On the Box - Presuppositional Apologetics.
Video: 6 Days of Creation and the Eisegesis Problem.
Blog post / Video: The Ultimate Proof of Creation.

For more on Mormonism from a Presuppositional approach:
www.godorabsurdity.com/mormonism.html.