Debate: Dr. Zakir Naik vs. Dr William Campbell - The Quran and the Bible in the Light of Science 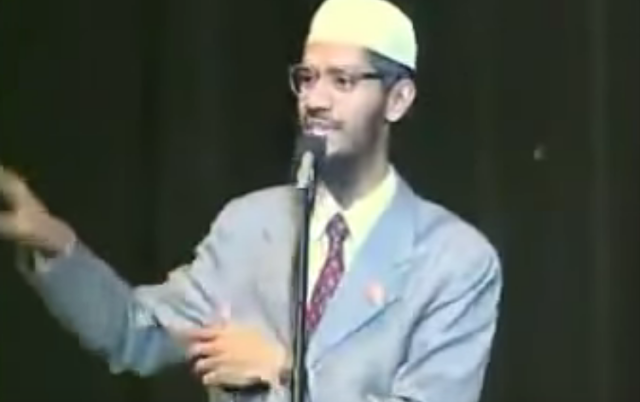 At 4 hours and 19 minutes this is by far the longest debate I’ve ever watched!

The video is split into two parts, and towards the end of Part 1 they edit a lot out, but then they have the full responses in Part 2. (Part 2 is just before 2 hours 20 minutes).

Dr Naik – a Muslim – has an amazing memory and ability to regurgitate verses of the Qur'an and  Bible. If nothing else he is a brilliant showman. Like a magician who fools children into thinking magic is real he attempts to dazzle the audience with fast talking and arbitrary statements made one after another - only pausing occasionally to soak up the cheers of "Allahu Akbar".

At one point he rattled off about 6 verses from the Qur’an that supposedly prove advanced knowledge of the hydrologic cycle – but he didn’t take the time to actually read the verses - and when I checked one of the Surah’s it only said something like ‘Allah causes the rain to fall.’ – hardly amazing. But because of his showmanship those who are shallow thinkers might easily be fooled into thinking he had proven his point when really he’d done nothing of the sort.

I’d liken Dr Naik’s style to that of a machine gun that doesn’t stop to reload but just keeps firing. Never mind that he’s a million miles away from all of the targets. It sounds impressive, but in reality anyone who actually takes a moment to look into what he is saying will find he’s way off the mark on pretty much everything he’s said.

Here is a video that carefully reviews 5 minutes of Dr Naik and finds 25 mistakes! 25!


In contrast Dr Campbell was careful and considered with his words, and backed up what he was saying. While lacking the showmanship of Dr Naik he made up for that with his carefully researched information. It was a shame though that Dr Campbell didn't mention the importance of worldviews or presuppositions when evaluated the Bible, the Qur'an and science.

In order to understand what a passage in the Bible means we need to do exegesis. Questions need to be asked such as:
- When was it written?
- Who was it written to?
- Who was the author?
- What style of literature is it?
- What is the context?

The opposite is eisegesis - where a person doesn't ask any of those questions. The only question in their mind is - how can I make this passage mean what I want it to mean? When people do this they end up reading their own preconceived ideas into the text.

I've mentioned those things because Naik does some of the worst eisegesis I've ever seen in his effort to distort the Bible. He said that he wasn't meaning to offend Christians in what he said - but his approach to the Bible was offensive in the way he threw out Scripture after Scripture with no regard for any due exegetical considerations.

Muslims reading this may think that I'm doing the same thing when I quote from the Qur'an, but I am not trying to make the Qur'an say anything that it isn't actually saying. If a verse in the Bible or the Qur'an is interpreted to mean the exact opposite of what it actually says then something has gone wrong. (Just to clarify - I do not believe that the Qur'an is true - I know that the Bible is true - but in order to critique Islam it is sometimes necessary to show a Muslim that what they believe is contradictory according to their own holy book.)

Naik raised the problem of whether the days in Genesis are literal or not. Unfortunately Dr Campbell indicated that he does not believe they are literal days (which I disagree with), so he didn’t give an adequate answer to Dr Naik on this issue. The problem of having light before the sun is easily solved – all you need is a directional light source and the rotation of the earth in order to have days. And the Bible says that in heaven God himself will be the source of light.

Surah 7:54 says “Indeed, your Lord is Allah , who created the heavens and earth in six days”

Pillars of the Earth
The reference to the Bible talking about the pillars of the earth is clearly poetic and not to be taken literally any more than we take the phrase “sunrise” to literally mean that the sun rises.
https://answersingenesis.org/astronomy/earth/contradictions-hanging-on-pillars-of-nothing/

More showmanship from Naik that seemed to fool many. Look at the contexts of the verses and you’ll see why this test is ridiculous. And as Dr Campbell said – we are not to tempt God. It is a sin to put God to the test in the way that Dr Naik is asking for.

Unicorns in the Bible?

The KJV uses the word unicorn, but they aren’t magical creatures like we often think of today. They were animals with one horn – probably the rhinoceros. Most modern translations use the word “wild ox”.  https://answersingenesis.org/bible-questions/unicorns-in-the-bible/

Question and Answer Part of Debate

During the biblical Flood was the water covering the mountains by 15 feet?

The mountains before the global flood would have been much smaller than modern mountains, and during the latter stages of the flood God raised up the mountains and sank down the ocean basins.

How could they fit all the animals on the ark?

Easy – they didn’t need millions of animals – just a pair of each species at the family group genus level. Around 10,000 animals altogether would have been the probable number. https://answersingenesis.org/noahs-ark/how-could-noah-fit-the-animals-on-the-ark-and-care-for-them/

Furthermore, this question is ironic given the fact that the Qur’an specifically states that 2 of every kind of species was taken onto the Ark, and teaches a worldwide flood. http://www.answering-islam.org/Shamoun/flood.htm

Why does the Bible say the Earth is flat?

It doesn’t. This is not true. The Bible clearly says that the earth is a circle – which in Hebrew can also mean sphere as they didn’t have two separate words for circle and sphere. Either Naik was not aware of this or doesn’t care and deliberately wants to mock the Bible.

The Bible doesn’t say that at all and he is deliberately distorting the Bible – see  “Naik on the sanitation laws of Leviticus” in this article
http://www.answering-islam.org/Responses/Naik/biblecontras.htm

See – “Naik on the adultery test of Numbers 5:11-31” in same article as above.
daughter unclean double period vs son

Naik calls the big bang an established fact. However this is not true. It is a widely accepted theory, and one which Christians should reject because it clearly contradicts the Bible. I do agree though that it’s important to make a distinction between established things in science, and theories that are not established. Biblical creationists often talk about observational science vs historical (origins / forensic) science. There is nothing in the Bible that contradicts solid observational science.

Michel had no children or 5 sons?

It’s most likely a translation error which most modern translations have corrected thanks to the science of textual criticism.
https://answersingenesis.org/contradictions-in-the-bible/did-michal-have-children-or-not/

This is just nonsense. Jesus’ adoptive father was Joseph.

Luke 3:23 (NIV)
“Now Jesus himself was about thirty years old when he began his ministry. He was the son, so it was thought, of Joseph, the son of Heli”

This doesn't mean Joseph and Heli were his fathers - it means Joseph was his adoptive father and Heli was the father of Joseph.

On closer inspection of Naik's claims they evaporate like smoke in the wind. I wouldn't believe a word that comes out of his mouth based on the research I've done so far. It's a shame that people like Naik get such a wide audience amongst Muslims, and his popularity has more to do with his showmanship than anything else. He says what they want to hear - and never mind about checking the facts or being careful to carefully represent what Christians actually believe.