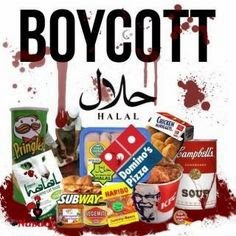 Halal food is everywhere! It's not just meat that can be halal but it's a wide range of products including things like soup, chocolate and yogurt.  Usually (but not always) halal food is labelled as halal such as the Cadbury chocolate bar below. (However, nowadays Cadbury seem to have removed the halal logos on their products, but according to their website they are still halal certified).

Halal is an Arabic word which means "permissible" and in the case of food it refers to food that has been ritually slaughtered according to Islamic law (sharia). Animals such as cows, sheep and chickens are killed by having their throats slit. Usually the animals are hung upside down while still alive so that the blood can drain out. Sometimes they are stunned beforehand but often they are not, and it can take up to 2 minutes for the animals to die. (In New Zealand they are stunned but with a lower voltage than normal so that they are still actually alive when they are killed). While all of this is going on a Muslim priest prays in the name of Allah over the animals. 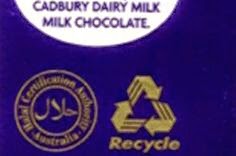 - It's an inhumane and barbaric way to kill animals. (This is not the main issue for me though).
- A percentage of the profits from this trillion dollar industry ends up in the hands of terrorist groups such as the Muslim Brotherhood and Hamas. (See this article: Can Buying Food Contribute to Terrorism?, and this 5 minute CBN video)
- Stop the Islamisation of the West (See this video: Geert Wilders Islam Warning to Australia)
- Stop the spread of Sharia (Islamic law, of which halal ritual slaughtering is a part. See Ban Sharia Law Worldwide)
- Christians are told to avoid eating food that has been sacrificed to idols and to eat for God's glory (1 Cor 10:19-33) - how can we do that knowing that the food has been offered to the false god Allah and that it is indirectly supporting terrorism?
- The issue of not eating food sacrificed to idols is so important to God that in the Bible it is one of the few commands given to Gentile Christians, and God rebuked two churches in the Book of Revelation for eating food sacrificed to idols. (Rev 2:14, Rev 2:20)
- This is an opportunity for Christians to be a witness and stand up for Christ.