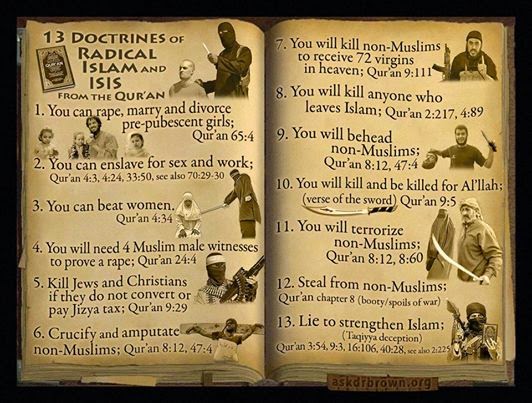 Some people have questioned whether the above doctrines are actually from the Qur'an, so I thought I'd take the time to check the references and share them so that everyone can easily see that they are indeed correctly representing the Qur'an.

While the title of this picture and article use the phrase "Radical Islam" the terms 'radical' and 'moderate' in relation to Islam are not Islamic terms - there is only one kind of Islam and that is what the Qur'an teaches - which is what most people call "Radical Islam". Islam is Islam and these 13 doctrines all come from the Qur'an. Any Muslim who does not believe or practice these doctrines is not being faithful to the actual teachings of the Qur'an.

If any Muslims reading this don't like what the Qur'an says then I've got a solution for you - realise that the Qur'an is a false revelation that cannot be true and leave Islam. Read the Bible and especially the New Testament Gospels of Jesus and turn to the true Jesus Christ who died for your sins. For more on why Islam cannot be true see www.GodorAbsurdity.com/islam.html.

"And for such of your women as despair of menstruation, if ye doubt, their period (of waiting) shall be three months, along with those who have it not. And for those with child, their period shall be till they bring forth their burden. And whosoever keepeth his duty to Allah, He maketh his course easy for him." (Qur'an 65:4 - Pickthall) (See Pedophilia in the Quran - WikiIslam) 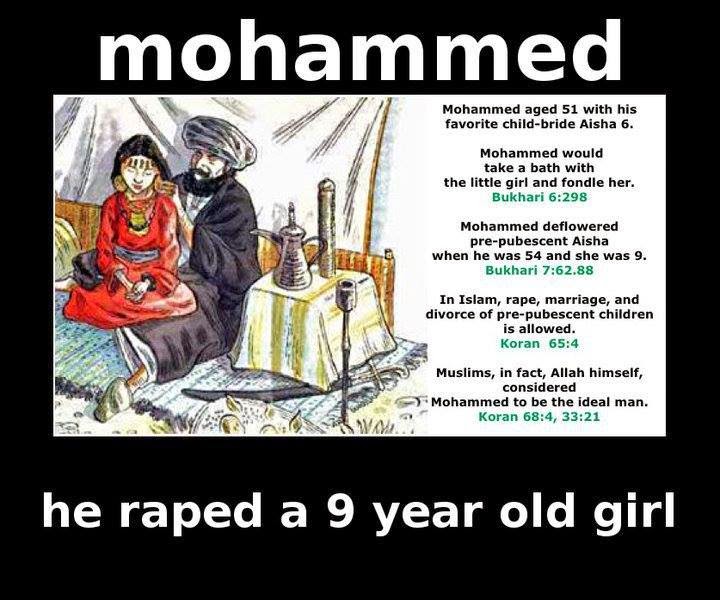 Here is the exact quote for one of the verses from the meme above:

"And all married women (are forbidden unto you) save those (captives) whom your right hands possess. It is a decree of Allah for you. Lawful unto you are all beyond those mentioned, so that ye seek them with your wealth in honest wedlock, not debauchery. And those of whom ye seek content (by marrying them), give unto them their portions as a duty. And there is no sin for you in what ye do by mutual agreement after the duty (hath been done). Lo! Allah is ever Knower, Wise." (Qur'an 4:24 - Pickthall)

"And those who preserve their chastity
Save with their wives and those whom their right hands possess, for thus they are not blameworthy;" (Qur'an 7:29 - 30 - Pickthall)

"Men are in charge of women, because Allah hath made the one of them to excel the other, and because they spend of their property (for the support of women). So good women are the obedient, guarding in secret that which Allah hath guarded. As for those from whom ye fear rebellion, admonish them and banish them to beds apart, and scourge them. Then if they obey you, seek not a way against them. Lo! Allah is ever High, Exalted, Great." (Qur'an 4:34 - Pickthall)

(The word scourge is also translated strike or beat in other translations). 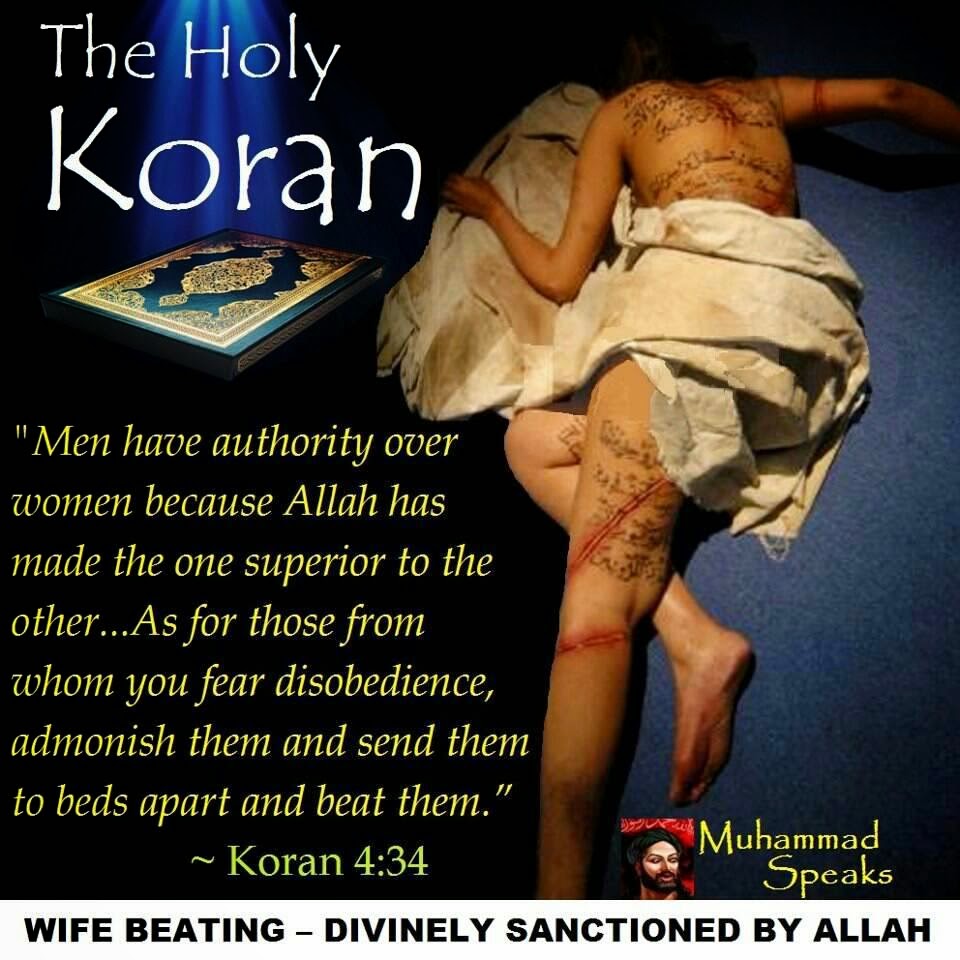 "And those who accuse honourable women but bring not four witnesses, scourge them (with) eighty stripes and never (afterward) accept their testimony - They indeed are evil-doers" (Qur'an 24:4 - Pickthall)

Because of this unjust islamic law many women who are the victims of rape in Muslim countries end up being found "guilty" of adultery which can mean being killed. 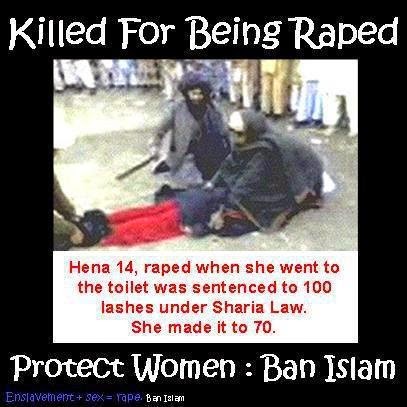 5. Kill Jews and Christians if they do not convert or pay Jizya tax (Qur'an 9:29)

"Fight against such of those who have been given the Scripture as believe not in Allah nor the Last Day, and forbid not that which Allah hath forbidden by His messenger, and follow not the Religion of Truth, until they pay the tribute readily, being brought low."  (Qur'an 9:29 - Pickthall)

"When thy Lord inspired the angels, (saying): I am with you. So make those who believe stand firm. I will throw fear into the hearts of those who disbelieve. Then smite the necks and smite of them each finger." (Qur'an 8:12 - Pickthall)

(smite the necks - i.e. behead them and cut off their fingers)


"Now when ye meet in battle those who disbelieve, then it is smiting of the necks until, when ye have routed them, then making fast of bonds; and afterward either grace or ransom till the war lay down its burdens. That (is the ordinance). And if Allah willed He could have punished them (without you) but (thus it is ordained) that He may try some of you by means of others. And those who are slain in the way of Allah, He rendereth not their actions vain." (Qur'an 47:4 - Pickthall)

"The only reward of those who make war upon Allah and His messenger and strive after corruption in the land will be that they will be killed or crucified, or have their hands and feet on alternate sides cut off, or will be expelled out of the land. Such will be their degradation in the world, and in the Hereafter theirs will be an awful doom;" (Qur'an 5:33 - Pickthall) 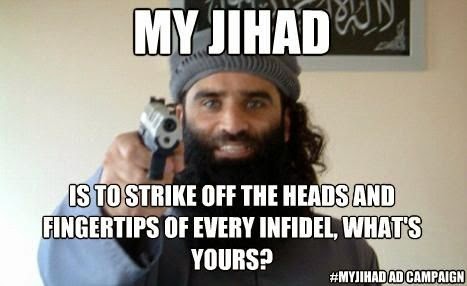 "Lo! Allah hath bought from the believers their lives and their wealth because the Garden will be theirs: they shall fight in the way of Allah and shall slay and be slain. It is a promise which is binding on Him in the Torah and the Gospel and the Qur'an. Who fulfilleth His covenant better than Allah? Rejoice then in your bargain that ye have made, for that is the supreme triumph." (Qur'an 9:111 - Pickthall) 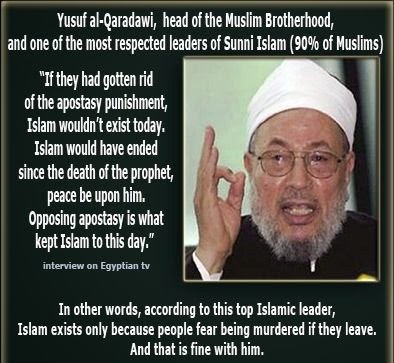 "They question thee (O Muhammad) with regard to warfare in the sacred month. Say: Warfare therein is a great (transgression), but to turn (men) from the way of Allah, and to disbelieve in Him and in the Inviolable Place of Worship, and to expel His people thence, is a greater with Allah; for persecution is worse than killing. And they will not cease from fighting against you till they have made you renegades from your religion, if they can. And whoso becometh a renegade and dieth in his disbelief: such are they whose works have fallen both in the world and the Hereafter. Such are rightful owners of the Fire: they will abide therein." (Qur'an 2:217 - Pickthall)

"They long that ye should disbelieve even as they disbelieve, that ye may be upon a level (with them). So choose not friends from them till they forsake their homes in the way of Allah; if they turn back (to enmity) then take them and kill them wherever ye find them, and choose no friend nor helper from among them," (Qur'an 4:89 - Pickthall) 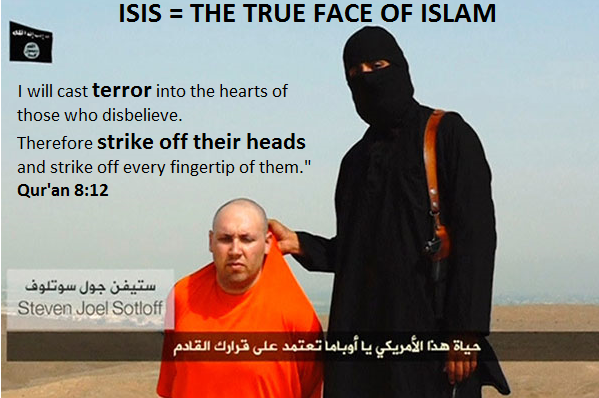 "Then, when the sacred months have passed, slay the idolaters wherever ye find them, and take them (captive), and besiege them, and prepare for them each ambush. But if they repent and establish worship and pay the poor-due, then leave their way free. Lo! Allah is Forgiving, Merciful." (Qur'an 9:5 - Pickthall)

Surah 9 is the second to last chapter of the Qur'an and because of the Islamic doctrine of abrogation it supersedes all other peaceful verses in the Qur'an (although there are very few such peaceful verses - and in context Islam's idea of peace is only for those who submit to Allah, convert, or pay the exorbitant and humiliating Jizya tax). 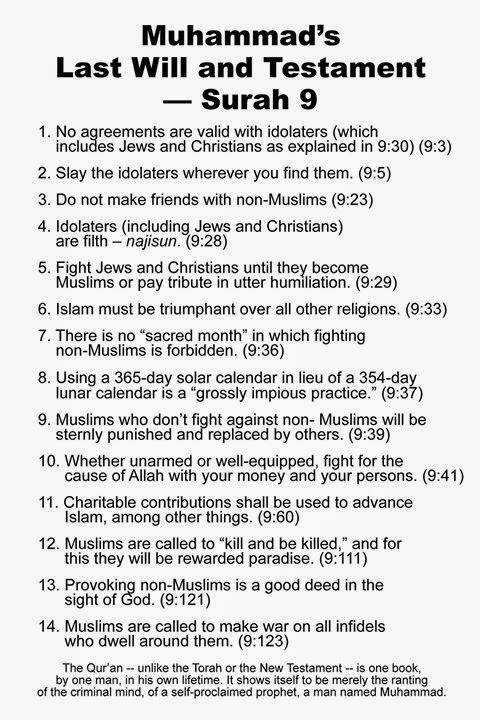 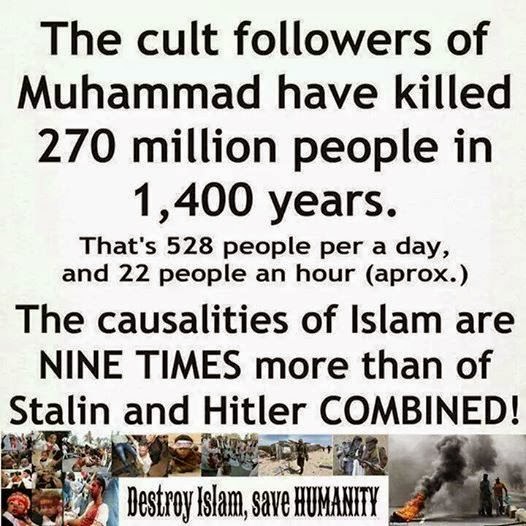 "[Remember] when your Lord inspired to the angels, "I am with you, so strengthen those who have believed. I will cast terror into the hearts of those who disbelieved, so strike [them] upon the necks and strike from them every fingertip." (Qur'an 8:12 - Sahih International)

"And prepare against them whatever you are able of power and of steeds of war by which you may terrify the enemy of Allah and your enemy and others besides them whom you do not know [but] whom Allah knows. And whatever you spend in the cause of Allah will be fully repaid to you, and you will not be wronged." (Qur'an 8:60 - Sahih International) 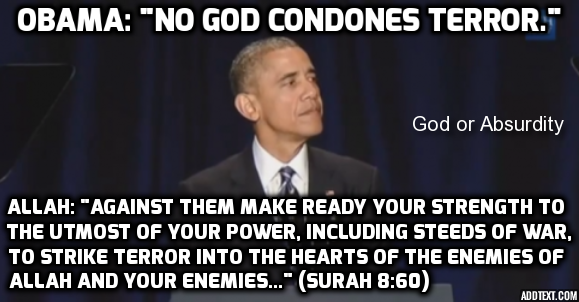 (See Son of Hamas founder says Allah is of the Quran is the world's greatest terrorist.)

"They ask thee (O Muhammad) of the spoils of war. Say: The spoils of war belong to Allah and the messenger, so keep your duty to Allah, and adjust the matter of your difference, and obey Allah and His messenger, if ye are (true) believers." (Qur'an 8:1 - Pickthall)

"And they (the disbelievers) schemed, and Allah schemed (against them): and Allah is the best of schemers." (Qur'an 3:54 - Pickthall)

Schemed should be translated deceived / deceiver - Allah - The Greatest Deceiver of them All. 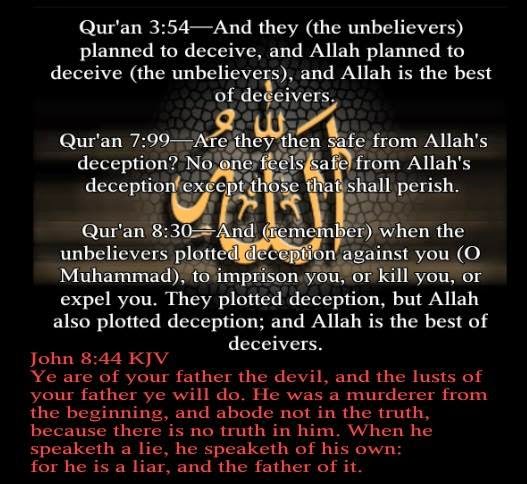 "And a proclamation from Allah and His messenger to all men on the day of the Greater Pilgrimage that Allah is free from obligation to the idolaters, and (so is) His messenger. So, if ye repent, it will be better for you; but if ye are averse, then know that ye cannot escape Allah. Give tidings (O Muhammad) of a painful doom to those who disbelieve," (Qur'an 9:3 - Pickthall)

(It's ok for Allah and Muhammad to lie and break treaties with unbelievers). 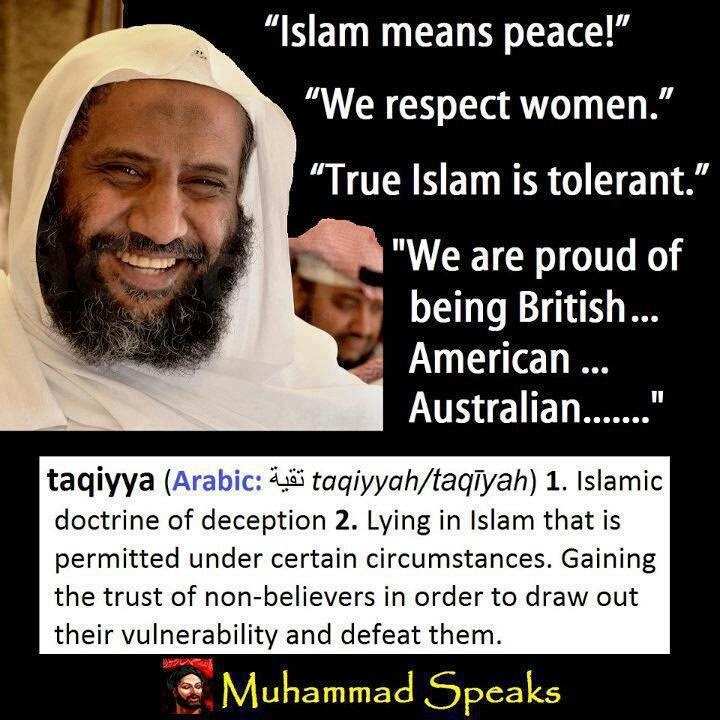 "Whoever disbelieves in Allah after his belief... except for one who is forced [to renounce his religion] while his heart is secure in faith. But those who [willingly] open their breasts to disbelief, upon them is wrath from Allah , and for them is a great punishment;" (Qur'an 16:106 - Sahih International)

(It's ok to lie when under compulsion and say that you aren't a Muslim if you're under threat). 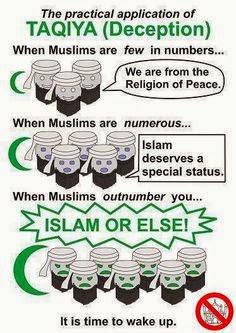 "And a believing man of Pharaoh's family, who hid his faith, said: Would ye kill a man because he saith: My Lord is Allah, and hath brought you clear proofs from your Lord? If he is lying, then his lie is upon him; and if he is truthful, then some of that wherewith he threateneth you will strike you. Lo! Allah guideth not one who is a prodigal, a liar." (Qur'an 40:28 - Pickthall)