"The former partner of murder accused Antonie Dixon has recounted the moment he attacked her with a samurai sword, slicing her hand off, as he yelled she was a sacrifice to Allah... Dixon started yelling he wanted to chop their heads off"  (Witness recounts hand being sliced off - stuff.co.nz.) 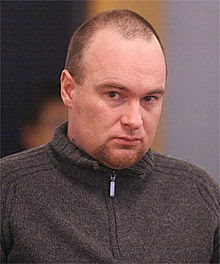 Ok, so this news story about Antonie Dixon is from 2008, but it's very relevant for today especially as most people aren't aware of the islamic connection in this story. Most kiwis just remember the picture of an insane looking Dixon as he stood in the dock on trial. But according to news reports he was acting insane for the jury to try and get off on grounds of insanity.

According to the victim, the reason her hand was sliced off is because he was trying to cut her head off and she had her hands raised to try and protect her head. So where did he get the idea from to cut someone's head off as a sacrifice to Allah? Perhaps he had read the Qur'an where Allah commands believers to "strike off their heads" (Qur'an 8:12). Perhaps he had heard about Muhammad and his followers beheading 800 peaceful Jews in one day? (See here).

Why wasn't the Allah connection made more of in the mainstream media when it happened? I don't even think most mainstream news channels mentioned that he had invoked the name of Allah and tried to behead people. I know why - it's because the media are too PC and don't want to say anything that might offend Muslims. Also most in the media are clueless about Islam. In America the recent Oklahoma beheading is still being called a "workplace incident", as is the Fort Hood massacre - both committed by Muslims who were performing jihad attacks.

The story that most have focused on with Dixon is that he was high on methamphetamine. It's also a fact that his mother and members of the Jehovah's Witness cult terribly abused him.

These things matter because ISIS supporters are already here in New Zealand. Just today an ISIS website that was being run by someone from New Zealand was shut down. (See here).

And our Prime Minister John Key is wanting to send our SAS to join coalition forces in the fight against ISIS, as well as considering NZ terror law change. (See here).


If Facebook comments are any indication then it would seem that most New Zealanders want to keep their heads firmly in the sand over this issue. Consider these comments:

What Matt and the other 229 people who liked his comment fail to realise is that although we haven't had any ISIS style beheadings or obvious Islamic terror attacks here in New Zealand we do need to get involved because we are western kafir infidels who are already a target whether we get involved directly in Iraq or not. We need to fight for freedom just our ANZAC soldiers fought in WWI and WWII.

I believe that unless we take action against ISIS and take measures to combat the threat from Islam it is just a matter of time before Muslims start beheading people here in New Zealand.

It is good that the NZ government are beginning to wake up to what is going on, but much more needs to be done if we are to overcome Islamic terrorism domestically and abroad.

We need to learn from the mistakes that Europe has made before it's too late. The warnings from Geert Wilders to Australia are just as relevant to us here.