Is God a Moral Monster?

Atheist: Yahweh is evil because he ordered the Israelites to wipe out the Canaanites including killing their babies. Your god is a moral monster that I would never worship.

Christian: Apart from the fact that you don't believe in objective morality, if you knew that Hitler as a baby would grow up to commit atrocities, would you have killed him as a baby?

Christian: So how do you know that if God hadn't have killed those babies along with their evil parents that they wouldn't have grown up to bring worse evil on the planet than Hitler? Think of ISIS and all of the evil committed by Muslims over the last 1,400 years. Islam came from the Arabs who came from Ishmael. If you had a chance to kill Ishmael as a child would you have done that? Or if God had struck the baby Ishmael dead would you be calling that evil? God didn't because of his mercy and look what happened. If anything God didn't kill enough babies in the Bible but because he killed a few you're complaining that he is evil. Why do you have such a double standard?

Atheist: I never thought of that...

Christian: If God wiped out ISIS today I don't think many people would be complaining. And the evil of the Canaanites was just as bad if not worse than ISIS. They were involved in gross immorality and sacrificed their children to their gods by burning them alive on idols. God waited 400 years with the wicked Canaanites before he said enough is enough and brought judgment. On the one hand you complain about all of the evil in the world and that God should put an end to it, but on the other hand when God does things to limit the evil in the world you complain that God is evil. So no matter what God does you accuse him of being evil. If you want God to do away with all evil how long do you think imperfect people like you and I would last? There is evil in the heart of everyone to varying degrees, and without Jesus Christ and his mercy we'd all be facing God's wrath. While we are talking about it being evil to kill babies - do you believe that it's evil to kill pre-born babies?

Atheist: I believe that people should have the right to abortion if they want it.

Christian: So you're against God killing children but it's fine for us to do that for the sake of convenience? It sounds to me like that's another double standard you've got. Abortion is murder because it's killing pre-born babies. Abortion is the modern holocaust of our age. Millions of babies have been murdered in a holocaust that is worse than anything Hitler did. God isn't a moral monster - humans are the ones who commit evil acts - not God. You need to repent and put your trust in Jesus Christ. He can cleanse our evil hearts but we have to put our trust in Him.

Atheist: You've raised some interesting points that I'll have to think about.

Christian: I hope that you'll think seriously about these things and turn to God sooner rather than later. No one knows when their last heart beat will be. 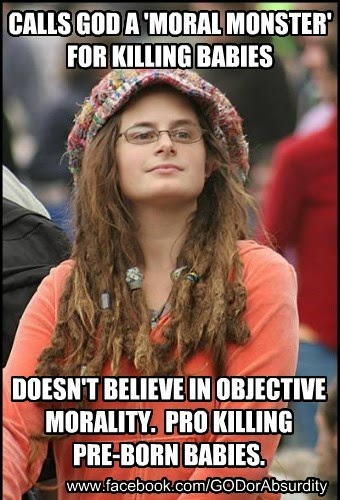 Email ThisBlogThis!Share to TwitterShare to FacebookShare to Pinterest
Labels: morality