I was Banned by Facebook for an Absurd Offense

A few days ago I posted this picture on my Facebook God or Absurdity page along with the hashtag #WeAreAllMuslim : 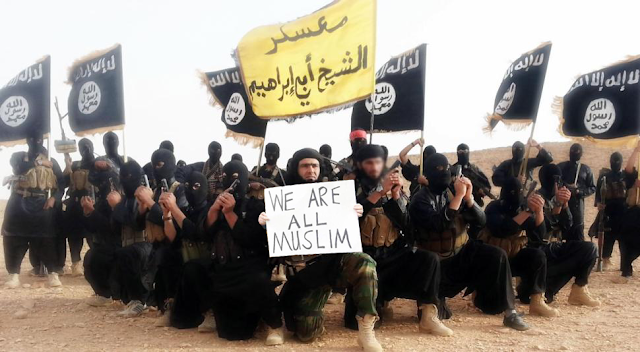 I made the picture in response to the idiotic #WeAreAllMuslim campaign started by Michael Moore which included a picture of himself standing in front of Trump Tower and holding a sign saying
'WE ARE ALL MUSLIM':

His idea is to oppose what he sees as anti-Muslim rhetoric from Donald Trump and others, and he is trying to encourage people to stand up for Muslims and show their solidarity with them.
(See Michael Moore starts #WeAreAllMuslim Campaign in Front of Trump Towers - Jihad Watch)

But as David Wood rightly points out in his recent video on this topic, Michael Moore needs to look up 4 words in the dictionary: 1. We, 2. Are, 3. All, and 4. Muslim. Not only is he being absurdly stupid but he is also insulting Islam because of the strong distinction made in Islam between those who are actually Muslim (who have submitted their lives to Allah and accept that Muhammad is the prophet of Allah) and those who are not Muslim (who according to Islam are kafirs (non-Muslims / infidels) that should be killed if they will not submit to Islam). 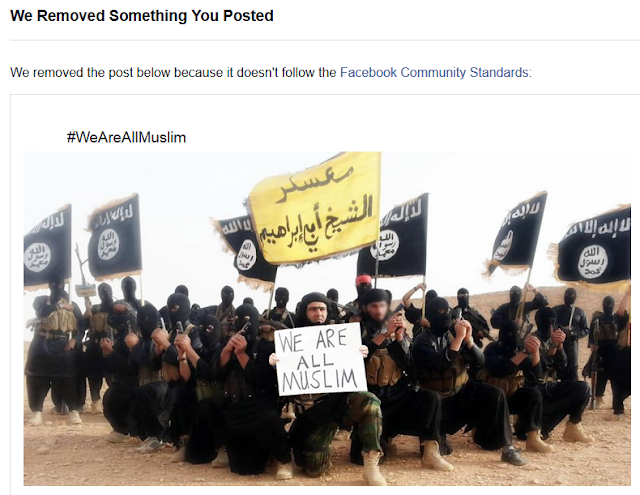 For some reason Facebook didn't seem to have a problem with the other picture I made and posted just a few hours after the first one: 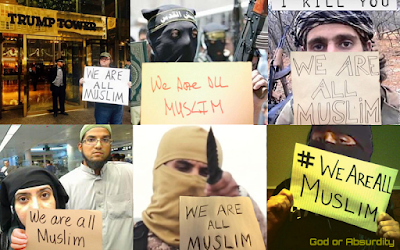 In the wake of all of this I made another review of Facebook's community standards and can only see two possible categories that I may have been deemed to have violated - one is using "hate speech", and another is related to expressing support for "dangerous organizations". I've done neither of those things. My only real "crime" is that I've offended Muslims who either don't have a clue about what it really means to be a Muslim or I've been on the receiving end of Muslims who are engaging in taqiyya (lying for Islam) in order to try and keep people deceived about what Islam really is.

If Facebook were honest they'd have another section in their community standards - "offending Muslims" which it would seem is not allowed under the new Facebook fascism (a.k.a. sharia law compliance).

Most of the employees at Facebook are most likely to be liberals, and a small number are likely to be Muslims, so I can understand them getting upset at my anti Islam posts which are hitting on many things that the politically correct brigade deem as un-PC "hate speech". (I regularly post things on the God or Absurdity page about issues related to the evil of Islam, as well as the evil of abortion etc)

We are NOT all Muslim #WeAreNOTAllMuslim, but I have to wonder if Facebook staff are all Muslim with the way they are kowtowing to Muslims in an effort to try to preserve Islam's image. 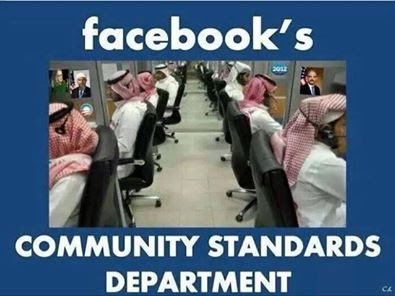 Some might argue that I shouldn't do anything to offend Muslims, but why should the truth be suppressed? Why should we have to tiptoe around Muslims like we might tiptoe around the mafia, especially if Islam is supposed to be 'the religion of peace'? It's not like my offending post was saying anything that isn't common knowledge - that ISIS / the Islamic State are claiming to be Islamic - they even have the Islamic shahada on their flag.

Others argue that Islam is not a violent ideology and that ISIS aren't Muslim, but this simply isn't true. Everything that ISIS are doing is based on the Quran and the Sunna (the actions and sayings of Muhammad which are recorded in the Hadith and Sira.) 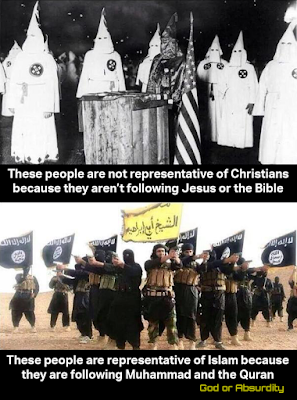 Liberals and moderate Muslims are desperate to avoid the association between ISIS and Islam. As I said to a Muslim the other day who had objected to my #WeAreAllMuslim post: "So you've got no problem with verses like this? ["I will cast terror into the hearts of those who disbelieve. Therefore strike off their heads and every fingertip of them." Quran 8:12] The Quran is full of over 100 jihad verses... 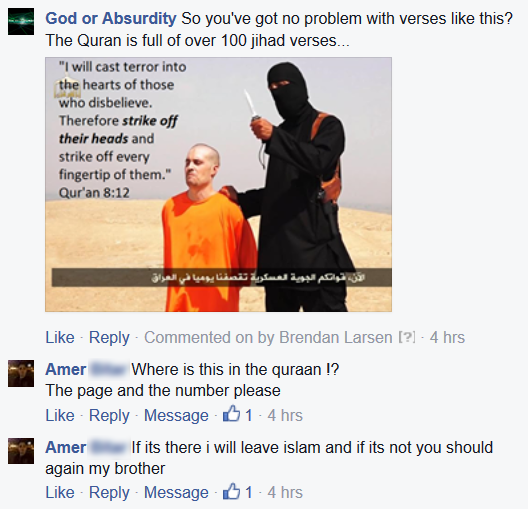 This Muslim is so ignorant of what the Quran actually says that even when confronted with a direct quote from the Quran commanding beheading of infidels he can't accept that it's in the Quran. Amer said he would leave Islam if the above verse was in the Quran, which I'd love to think is true, but he never responded after this. (From my research and experience talking with Muslims I've found that over 90% of Muslims have never read all of the Quran, and when confronted with the many verses of violence from the Quran they usually end up playing intellectually dishonest mind games to avoid the obvious).

All of this censorship is highly hypocritical of Facebook because they allow things that are much worse than what I posted that are often mocking Christianity, contain graphic violence, are x-rated, or sometimes contain a combination of all of the above.

There is even a Facebook page called "Death to America & Israel" that regularly has extreme posts inciting hatred and violence in particular against Israel and the Jews.
(See God or Absurdity Blog: Facebook's "Community Standards" Hypocrisy
and Religious Censorship Rising on Facebook, iTunes, Conservatives Cry - Charisma News)

We are living in a time when Islam is becoming more and more of a problem around the world with terror attacks happening with increasing frequency, and yet so few are willing to speak out against Islam out of fear of offending. If we continue to try and appease the bullies we are destined to live in subservience to them. The Islamic term for this is called 'dhimmitude', and it's a state that most are living under without even realising it.
(See TheReligionofPeace - Islam: Requiring Other Faiths to Pay Up
and Boycott Halal - God or Absurdity Blog.)

As the well-known saying goes - 'evil triumphs when good people do nothing'. Don't be one of those people who do nothing to stand against injustice. We all have a voice and can make a difference if we join together and stand up for what is right. In the words of Charlie Hebdo, "I would rather die standing than live on my knees." 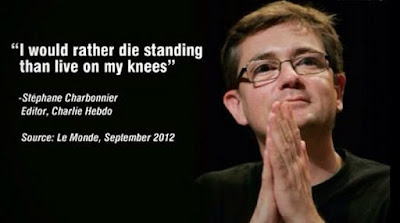 The main reason that Islam seems to be taking over the world and creating terror is because most people are afraid to speak the truth about it and do what it takes to oppose it. The West's rejection of Christianity has created a vacuum that is enabling Islam to come in and to flourish. 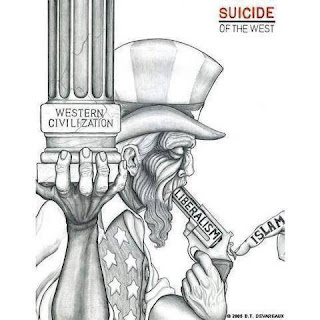 The ultimate solution to the problem of Islam and the problem of terrorism is the gospel of Jesus Christ. When I talk with Muslims online I explain to them why Islam is evil and why they need to turn to Jesus. I encourage them to read the Quran and the Bible for themselves and to seek the truth. While most Muslims can't handle the truth, some do listen (and even with those that seem not to listen you never know what is going on in their hearts), and I've had one Muslim so far that is very close to giving their life to Christ as a result of hearing the gospel through this ministry. (I think that person may even have given their heart to Christ but they are struggling to publicly profess their faith out of fear of what will happen if they do so).

If you'd like to keep up-to-date with 'God or Absurdity' I encourage you to subscribe to my blog here by submitting your email in the box above on the right (Follow by email). That way if the God or Absurdity Facebook page does get shut down and removed by Facebook you'll be able to be kept informed about what is going on. If that does happen then I'll try and create a new Facebook page with a slightly different name. I also have a Google Plus account which I use sometimes but I have found it isn't as good as Facebook due in part to being less popular and also it seems to have more atheist trolls.

Finally, if you'd like to help support this ministry financially then you can make donations via www.godorabsurdity.com/donate.html.