This meme was removed from the God or Absurdity Facebook page today for violating Facebook's Community Standards. As a result our page was unpublished for approximately 7 hours and my backup Facebook account has been hit with a 24 hour ban. 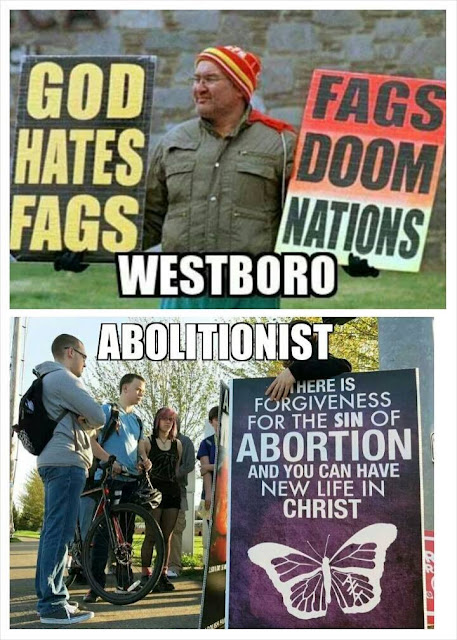 Here is the explanation I put with the above meme when I posted it:

In hindsight I could have explained more clearly that we are against Westboro (it's a cult and hate group), but I thought that the contrast between the top picture and the bottom picture was clear enough to show that one has a message of hate and the other group (abolitionists) have a message of love - that forgiveness for the sin of abortion can be found through Jesus Christ. You can also clearly see in the picture that a relaxed conversation is taking place. Those looking at the sign are not upset but are interested in their message.

I've lost count of exactly how many times we've been unjustly banned by Facebook for speaking the truth about things like Islam, abortion, and homosexuality. (See below for info about the other occasions this kind of thing has happened).

People might argue that we're violating Facebook's community standards around hate speech, but I don't believe we are. We are not promoting hate - we are saying hard truths out of love and the desire for all people to come to know Jesus Christ - but this is where part of the problem comes in because what one person considers to be a hard truth another considers to be hate speech. And these days the reality is that truth has become the new hate speech.

Another part of the problem is the way that the Facebook guidelines are inconsistently applied. For example yesterday an LGBT supporter posted this message on our page:

This is absurd. Memes that have a message against Westboro and call abortion a sin are violations of their standards, but comments that are bordering on being death threats are ok? What can I do about it to appeal? Nothing. All I can do really is speak out against this kind of nonsense and encourage others to get the word out.