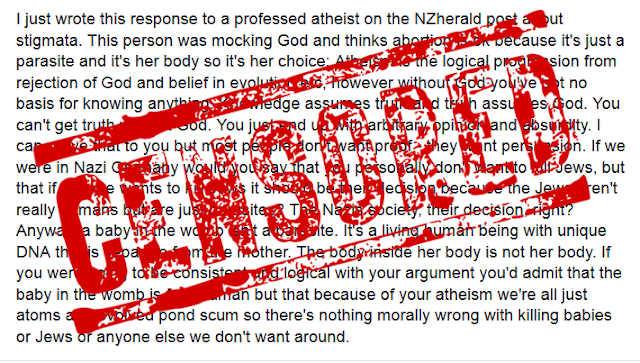 Facebook have done it again - censored another post I made. This time they censored this comment, gave me a 24 hour ban, and unpublished the God or Absurdity Reloaded FB page. (It was a temporary unpublishing it would seem). 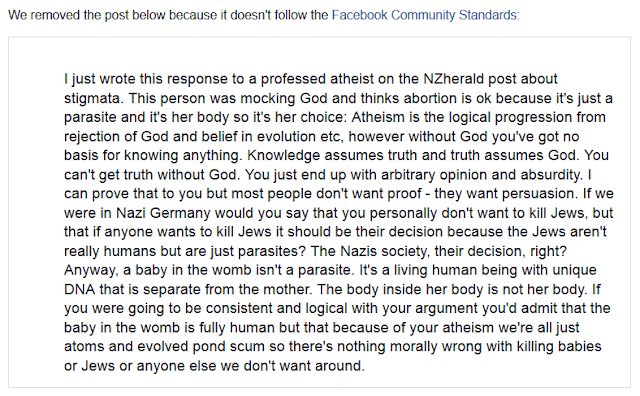 The conversation took place on the NZ herald facebook page re this story about stigmata.
Many people on that post were mocking God including Max: 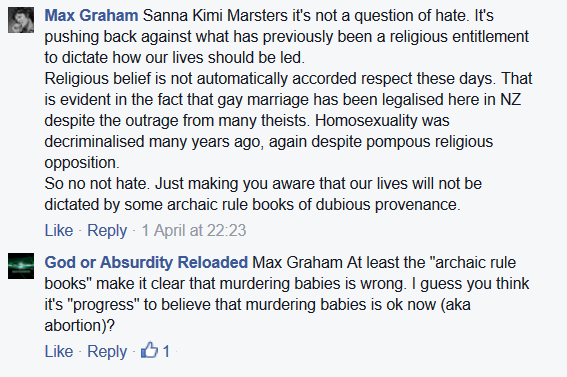 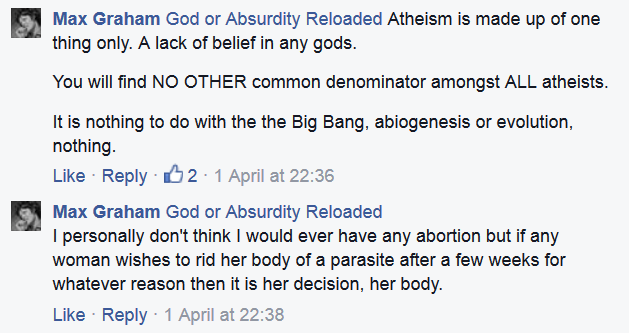 And after that I wrote the comment which is the one above that got reported and censored.


The conversation reminds me of a meme that got banned from our page a month or two ago: 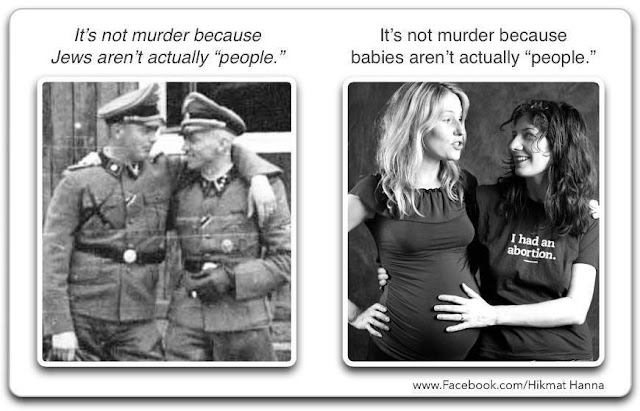 The whole thing is absurd - that Facebook would censor and ban an obvious example of reductio ad absurdum is ridiculous. For those who are still confused or any Facebook admins that are particularly obtuse - I don't hate Jews or think that the Nazi holocaust was good or that murder in any shape or form is good.

All I'm doing is simply taking the absurd atheistic evolutionary beliefs held by many in our society (such as Max) and taking those beliefs to their absurd but logical conclusion. Without God there is no basis for the sanctity of any human life - let alone babies in the womb. Without God we'd just be evolved pond scum or as Greg Bahnsen often said "matter in motion" (See for example 'The Great Debate'). So killing a baby would be no more murder than destroying a concrete block or a parasite would be murder - all of those things from a secular worldview perspective are just atoms bouncing around.

That's all I'm doing really. Taking what I've learned from Sye Ten Bruggencate and Greg Bahnsen, and "Pushing the Antithesis" to show the absurdity of the professed unbeliever's position. Unfortunately Facebook and society in general now consider that to be hate speech, but of course it's "ok" to talk about babies as parasites that can be killed if you don't want them.

One other thing I'd like to say is that I don't believe that the answer to the problem of censorship on Facebook is leaving Facebook. I believe that it's important that we as Christians continue to do what we can to stay on Facebook and not try and go off to some ghetto Christian social media where hardly anyone is. We need to do what we can to be a voice in what is today the largest online social meeting place in the world. Like it or not, that is what Facebook is these days, and I believe it is our duty as Christians to be salt and light there so that we can reach as many people as we can with the truth and with the gospel of Jesus Christ.

If you haven't already please subscribe to this blog by email. You can also help by subscribing to my YouTube channel, and liking our backup page www.facebook.com/goarevolutions.
Posted by Unknown at 6:29 PM