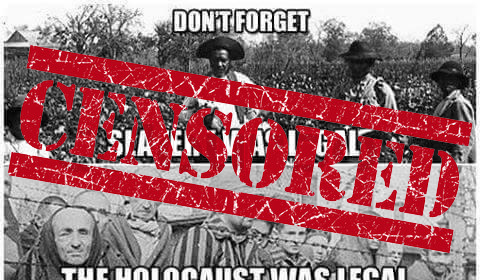 It could just be official - thinking and expressing those thoughts and ideas on Facebook is now a thought crime. This meme was removed today from God or Absurdity Reloaded for violating FB's community "standards" and I was hit with a 7 day ban on one of my accounts. Another admin on our page was hit with a 3 day ban, and the whole page was unpublished, although fortunately that was just temporary. 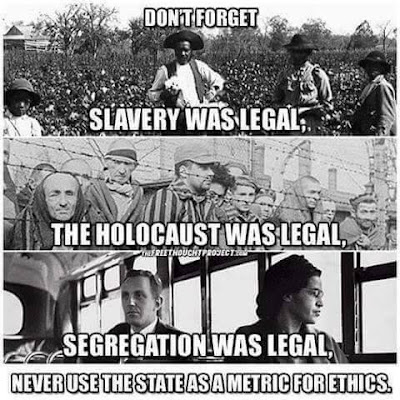 Ironically the meme was made by The Free Thought Project (see the website link in the middle of the meme. I checked their website and Facebook page (which has around 700,000 Likes) and they post a lot of conspiracy theories and things to do with government corruption. I'm skeptical about most conspiracy theories, but it's concerning that FB are censoring memes like that above. (I contacted the Free Thought Project and told them about the meme getting censored and they said that many of their admins have also been getting hit by bans.)

While the meme above doesn't mention abortion, it's a powerful argument against abortion especially given that one of the most common excuses people use is that it's legal. When I shared this meme it did mention abortion just above the meme because I shared it via the Facebook page Abolish Human Abortion Christchurch.

While there isn't much we can do about FB censorship, we can share the truth with others. So please share this blog and let others know what is going on.

Some have said that Christians should look at moving to a Christian alternative to FB, but I disagree. I believe that it's important that we continue to fight for the truth and stay where the majority of people are. I don't see how going off into a Christian ghetto is seen as progress. We have been called to be salt and light in the world, and so being a Christian presence on FB is vitally important.

One thing you can do to help is to subscribe to this blog by email. You can also like our backup FB page God or Absurdity Revolutions.

We will keep on pressing on and sharing the gospel of Jesus Christ and sharing the truth that the media won't tell you about the reality of abortion and Islam, as well as refuting and exposing atheism and evolutionary lies.

I believe that one of the reasons our page is being targeted for censoring is because we use a biblical presuppositional apologetics approach that challenges the false beliefs people have and gets under the skin of unbelievers and those holding to false beliefs.

The Bible says 'Thou shalt not murder' and so when we expose abortion as murder it is using the commandment against murder and applying it to the evil of our age. While there would seem to be atheists stalking our page in order to report things, I believe that it's likely that there are also FB admins that are essentially stalking our page. This could be because they're among one of the 1 in 3 women in America that have had an abortion, and as a result they feel guilty and angry that someone is calling out their sin for what it is.

Whatever the case may be, God is at work, and I believe that ultimately the bans and censoring will backfire and the truth will be made known.

Thanks for reading. What do you think about all of this? Leave your comment below.
Posted by Unknown at 10:33 PM