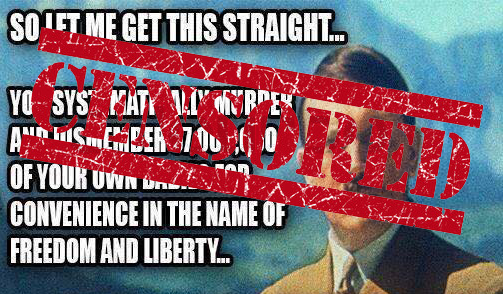 This is the third time this week that I've had a meme removed by Facebook and been banned. This time I've been given a 3 day ban on a backup account, and this meme was removed from the God or Absurdity Reloaded FB page. 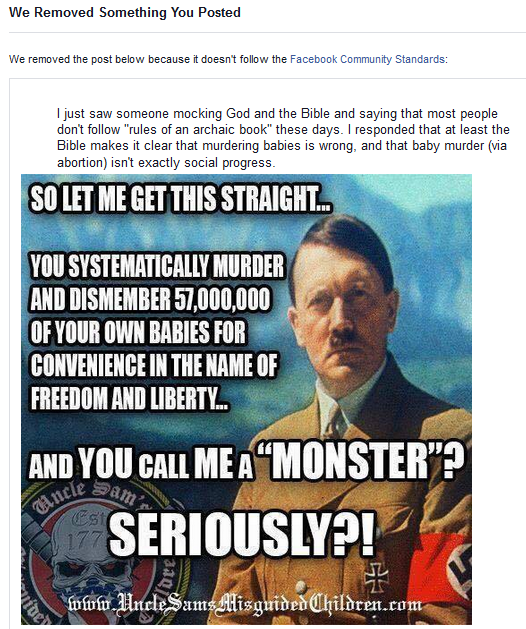 Facebook censorship is out of control, but there isn't much that I personally can do about it other than keep on speaking the truth. One thing you can do is to share this blog post with others. You can also sign up by email to this blog, and Like our backup Facebook page, which is God or Absurdity Revolutions.

If you'd like to donate to the work I'm doing you can do so at www.godorabsurdity.com/donate.html. It takes a lot of work to do everything I'm doing, and every time I get banned it increases the work I have to do to get the truth out there, but it does tell me that I'm on the right track as I'm obviously hitting a nerve with those that can't handle the truth and want to suppress the truth in unrighteousness.

Some might argue that the meme is offensive to those who have had an abortion - and I can understand that people might find it offensive, but it's far more offensive that babies are being murdered and our society wants to keep the reality of that hidden, just like the Nazis did with the holocaust.

If you have had an abortion then you can find forgiveness in Christ alone. He alone can remove the guilt and shame that comes from having murdered your child. And if you're truly repentant you'll want to do everything you can to discourage others from murdering their babies.

If you'd like to leave a comment you can do so in the comment section below, but derogatory or abusive comments will not be approved as I don't have enough time or energy to deal with trolls. If you've been banned from our page for trolling and are upset about that - it's likely that your expectations are unrealistic and belong to someone that is better paid and better supported than I am for the work that I do. (Currently the donations I'm getting don't cover the hours I'm putting in - they are just covering basic costs - although I do greatly appreciate those who are supporting this ministry).
Posted by Unknown at 11:06 AM