What is "Power Evangelism"? 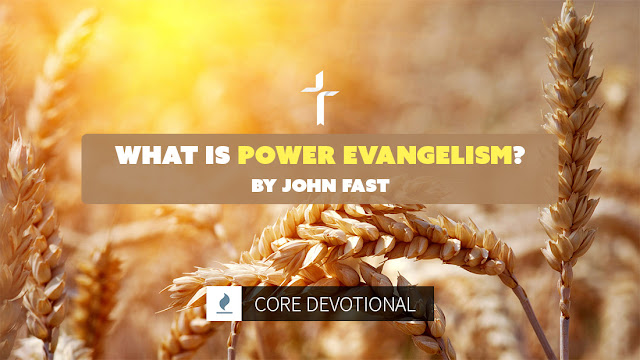 I found this very good article on "Power Evangelism" that I'm reblogging. I agree with most of it, and I'm posting it because I'm finding that there is an increasing focus from some Christians on power evangelism but it is often missing the preaching of the Gospel and apologetics that give an explanation for the reason as to why the gospel is true.

I'm not against Christians praying for the sick or praying for people to experience God's power. What I am against is the way that many charismatic Christians are relying on this method as if it is more powerful or more important than preaching the Gospel.

'Power evangelism’ is the term coined by the founder of the charismatic Third Wave Movement, John Wimber, to distinguish his evangelistic method from traditional evangelism, or what he disparagingly refers to as ‘programmatic evangelism’. According to Wimber, ‘power evangelism’ is evangelism which “comes with a demonstration of God’s power through signs and wonders,” and “is preceded and undergirded by demon-strations of God’s presence, and frequently results in groups of people being saved.” (Power Evangelism: Revised Version, John Wimber and Kevin Springer, HarperCollins, 1992,  p.78.)
These demonstrations consist of words of knowledge – which bear more resemblance to clairvoyance – healing, prophecy, and deliverance from evil spirits. Traditional gospel centered evangelism, it is argued, may result in conversions, but since these new believers do not experience dramatic signs, there is something missing from their conversion experience, resulting in incomplete, weak, and powerless Christians.
Since its inception in the mid-1980’s, power evangelism has captured the attention of millions of Christians worldwide. But is evangelism which relies upon the miraculous to prompt saving faith biblical evangelism? Is a believer’s assurance based on witnessing the miraculous? Is power evangelism scripturally based, or experientially based?

When the scribes and Pharisees demanded that Jesus perform an attesting miracle, He did not view it as an opportunity to prompt saving faith in his interlocutors. Rather, He labeled the desire for further signs as the mark of “an evil and adulterous generation” (Mt 12:38-39). Compare this with the blessing which Jesus pronounced on “those who have not seen and yet believe” (Jn 20:29). The demand for a sign was not limited to just the Pharisees. Sometimes it came from his many followers. The request seems to have been prompted by more than mere curiosity, for they ask, “What then do You do for a sign, that we may see, and believe You? What work do You perform?” (Jn 6:30). The crowd asks this after they had just witnessed the feeding of the 5000 (Jn 6:1-14). Jesus made it clear that the motivation which the crowd had for following Him was not that they had seen signs, but it was the fact that He had met their immediate desires, i.e. being fed (Jn 6:26). They did not look to Jesus for salvation, but for a fish sandwich. The desire to see signs is vigorously repudiated by Jesus. The clearest reason for this is given in Luke 16:19-31.
In this parable, the rich man begs Abraham to send Lazarus back from the dead to warn his five brothers of the certainty of God’s judgment (Lk 16:27-28). “But Abraham said, ‘They have Moses and the Prophets; let them hear them’” (Lk 16:29). But the rich man questions the sufficiency of God’s Word. His brothers need a sign (Lk 16:30). Abraham lets the rich man know that “if they do not listen to Moses and the Prophets, neither will they be persuaded if someone rises from the dead” (Lk 16:31). Signs and wonders are incapable of prompting saving faith. The persuasiveness of the gospel is not enhanced by the addition of signs and wonders. Consider the response of the Pharisees to Jesus’ raising of Lazarus (Jn 11:53).
According to Jesus, the Pharisee’s unbelief was not due to a lack of signs, wonders, or revelation, but of their failure to believe what had already been revealed (Jn 5:31-47). Their failure to believe Jesus was the result of their rejection of Old Testament teaching concerning the Messiah (Jn 5:37-47).
In the purpose statement to his gospel, the Apostle John indicates that he has presented sufficient evidence to lead someone to saving faith:
Many other signs therefore Jesus also performed in the presence of the disciples, which are not written in this book; but these have been written that you may believe that Jesus is the Christ, the Son of God; and that believing you may have life in His name. (Jn 20: 30-31). NASB (Emphasis added)
John does not say that his readers needed to have personally witnessed Jesus’ miracles in order to prompt saving faith. The testimony recorded in Scripture is sufficient. The demand for convincing signs did not end with Jesus’ death and resurrection. In 1 Corinthians, the Apostle Paul defended the sufficiency of the gospel against Jews who asked for signs (1 Cor 1:22). Rather than capitulate to their demands, Paul simply preached the gospel of Christ crucified (1 Cor 1:23; 2:1-2).
The testimony of both the Old and New Testament affirms that its documentation of signs and wonders is sufficient to lead anyone to saving faith. Those who deny the sufficiency of the Bible’s witness are judged by Scripture as unbelievers. ‘Power evangelism’ denies the sufficiency of Scripture. In ‘power evangelism’ Scripture is not sufficient to bring about conversion (Rm 1:16), to produce mature Christians (Jn 17:17), for effective evangelism (Acts 8:30-39), nor is the promise of Christ’s return sufficient comfort for those who are suffering. Assurance of salvation does not come from experiencing the miraculous, but by belief in, and faithful obedience to God’s revealed Word. (2 Pt 1:1-11).
Historically, it is not the absence of signs and wonders that has been a stumbling block, it is the message of the cross, and Jesus’ demands of discipleship which have caused people to reject the gospel (Jn 6:28-66; 1 Cor 1:23-24). Unfortunately, it is these key elements of the gospel, along with a call to repentance that is often missing from power evangelism.

Despite claims of being biblical, ‘power evangelism’ is experiential and pragmatic. Personal experience becomes the basis for reality, not the teaching of Scripture. The focus on experience as reliable is made abundantly clear by reading the testimonies on any ‘power evangelism’ web site. Experience, not the Bible, determines both its theology and its practice.
Advocates of ‘power evangelism’ are eager to point to the rapid church growth which their method seems to produce. Results are used as proof as its legitimacy.
Do not be fooled by the dramatic claims of ‘power evangelism.’ Remember, the last days will be characterized by false signs, and false teachers (Mt 24:24; Mk 13:22). The only true test of authenticity is whether a person’s teaching conforms to the Word of God. Let us be good Bereans (Acts 17:11).

Email ThisBlogThis!Share to TwitterShare to FacebookShare to Pinterest
Labels: evangelism