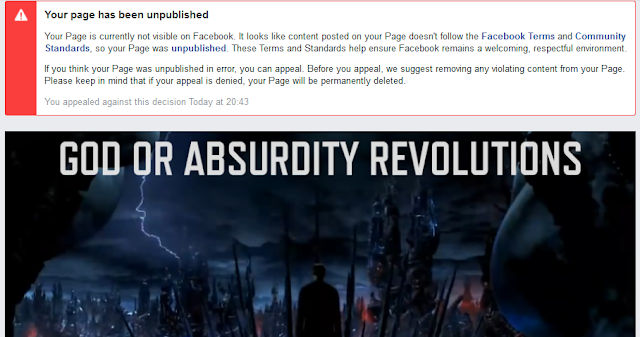 I've appealed the decision, but based on past experience the appeal is almost certainly going to be ignored by Facebook. So from this point on we're on to what was our backup page - God or Absurdity Online. (I'm currently locked out from the page until my 3 day ban expires on one of my accounts).

After well over a month of not having any problems with facebook censorship I had two posts removed within the space of about an hour. With that being the case it seems highly likely to me that atheist trolls have a secret group that they use to organize reporting raids on us.

The first thing to be removed today was this: 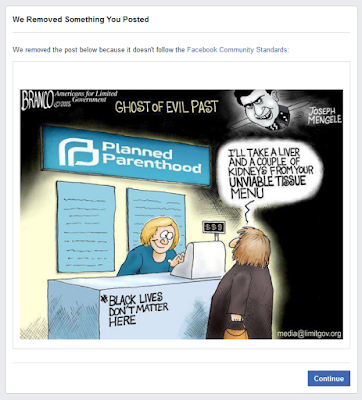 And the second thing to be removed shortly after that was this post: 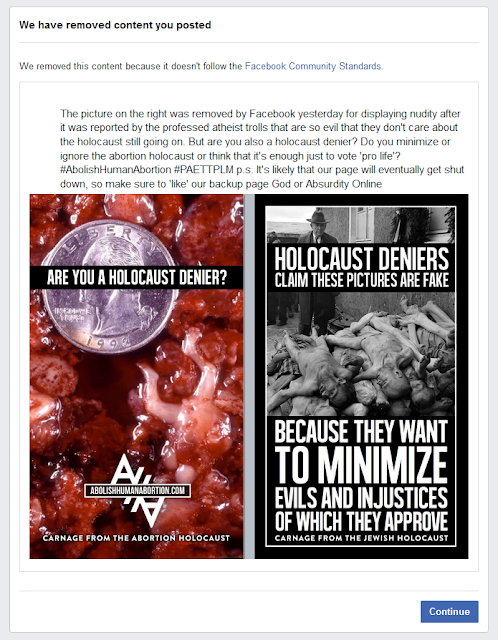 So now altogether we've had 34 posts censored and removed by Facebook. For the documented blog accounting for every single one of those 34 posts see
Is God or Absurdity the Most Censored Page Ever? (34 Banned Posts). Most of the banned posts are either exposing the evil of abortion or the evil of Islam.

All of this censorship is just going to backfire in the long term on those who keep taking us down. I've been in touch with Christian reporters and there is one reporter who has expressed interest in this story.

Professed atheists in particular hate our page because of the presuppositional apologetics we use and how we expose the absurdity as well as the evil consequences of denying God. There are few other pages on Facebook that do what we do in the way that we do it, and I'm pretty sure that God or Absurdity is the most censored ministry on Facebook.

If you'd like to support this ministry financially I'd love to hear from you. (See www.godorabsurdity.com/donate.html)

To see the God or Absurdity website see www.GodorAbsurdity.com .

What do you think? Comment Below (Note: Anonymous or abusive posts will not be published).