In this blog I look at the Greg Bahnsen vs RC Sproul debate. The full audio is here and the full debate transcript is here. (Both links open in a new window). 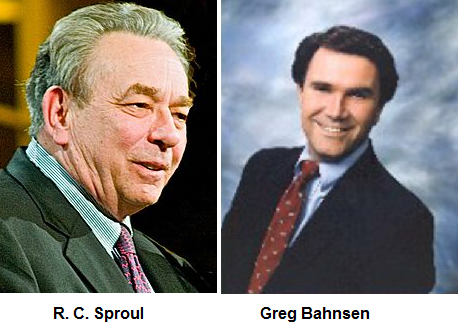 After hearing a number of presuppositionalists mention this debate I finally got around to listening to it. (The debate is from 1977 so it's been around a long time). Bahnsen and Sproul are both Reformed Christians and agreed on many things, but where they differed is their views on apologetic methodology. Bahnsen advocated Presuppositional Apologetics (PA), whereas Sproul advocated a classical approach which fits more into the category of Evidential Apologetics.

I thought that Bahnsen thoroughly won this debate, and that Sproul didn't even seem to fully understand PA in relation to the nature of ultimate standards. The things that Sproul said about the nature of certainty didn't make sense to me. He seemed to be saying that we need to build up the case for Christ using evidence and that this can bring us to high degree of probability about the truth of Scripture, but that certainty in a philosophical sense is not possible.

The second sentence above undermines the first sentence and effectively digs a hole for his position. How can he know for certain that he can have meaningful knowledge if he rejects the concept of certain knowledge?

To me it also struck me that Sproul only referred to Scripture on several occasions and even then he was only making general references rather than actually quoting passages. (He referred to Romans 1 twice and once alluded to Genesis 3 in relation to Eve and Satan).


In comparison Bahnsen quoted directly from at least 20 different Bible verses. Of course, this in itself doesn't prove anything - but to me it does reflect that Bahnsen and PA are rooted and grounded thoroughly in Scripture.

Bahnsen - The Certainty of Biblical Faith

Review / The Impossibility of the Contrary

Here's an interesting article by Bahnsen that is also relevant. In the article Bahnsen responds to the book Classical Apologetics, by R. C. Sproul, John Gerstner, and Arthur Lindsley. Bahnsen basically says the book is poorly written and attacking a strawman. Here's a quote from the article that sums things up well:

"We rejoice that Sproul, Gerstner, and Lindsley stand with us in worshiping the Triune God. Their effort to defend our common faith means well. But apologetics cannot be evaluated simply like an awkward Christmas gift received from a child. It is not simply "the thought that counts" here. The stakes are simply too high. College students cannot expect to respond to skeptical challenges with the kind of thinking found in this book and not suffer intellectual embarrassment. The argumentation is too easy to discredit, totally apart from personal antipathy to Christianity."