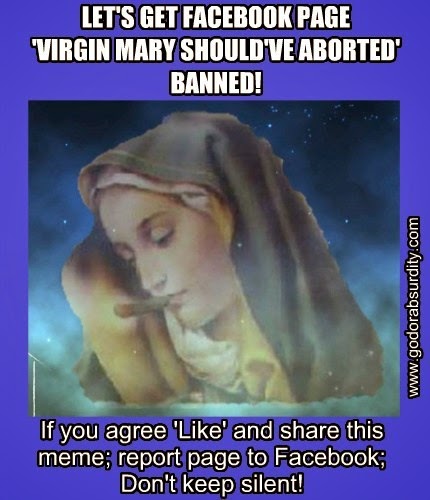 POST EDIT UPDATE: Since I wrote this blog quite some time ago I've seen this page and other similar ones taken down by Facebook at times, only for them to be reinstated a few days later or for the pages to rebuild quickly under slightly different names. While some of these pages step over the line, in the long term our main goal needs to be to pray for and share the gospel and God's truth with these people who are hopelessly lost.
___________________________________________

Let's get this page banned! Facebook allows this page to stay in spite of the fact that it's violating its own rules, but then they ban people who call Abortion murder. What's going on? Let's hold Facebook and Mark Zuckerberg responsible. While the page is directed at Catholics in particular, and I'm not Catholic, and nor am I endorsing Catholicism in any way, a quick look at the page and you'll see that it's an atheist group that hates God and is directed at mocking anything Christian. (Warning - the page is one of the spiritually darkest and most blasphemous hovels on the internet that contains pictures of a bloody crucified baby Jesus, and a pregnant Mary swearing among other things.) While mocking is one thing, this page goes way beyond just mocking and is intended to be extremely offensive towards Christians.

You can see the Facebook page in question here https://www.facebook.com/VirginMaryShouldveAborted. 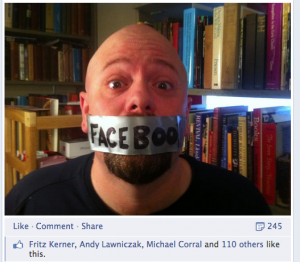 If any Christians doubted that we are in a spiritual battle against the forces of wickedness and that Atheists hate God, a quick reality check is in order... What's up when Facebook allows pages like this but then bans Christians who call abortion murder? (http://gospelspam.com/persecution-porn/)

"Woe to those who call evil good and good evil, who put darkness for light and light for darkness, who put bitter for sweet and sweet for bitter." (Isaiah 5:20)

"For although they knew God, they neither glorified him as God nor gave thanks to him, but their thinking became futile and their foolish hearts were darkened. Although they claimed to be wise, they became fools (Romans 1:21-22)

"Furthermore, just as they did not think it worthwhile to retain the knowledge of God, so God gave them over to a depraved mind, so that they do what ought not to be done. They have become filled with every kind of wickedness, evil, greed and depravity. They are full of envy, murder, strife, deceit and malice. They are gossips, slanderers, God-haters, insolent, arrogant and boastful; they invent ways of doing evil; they disobey their parents; they have no understanding, no fidelity, no love, no mercy. Although they know God’s righteous decree that those who do such things deserve death, they not only continue to do these very things but also approve of those who practice them." (Romans 1:28-32)