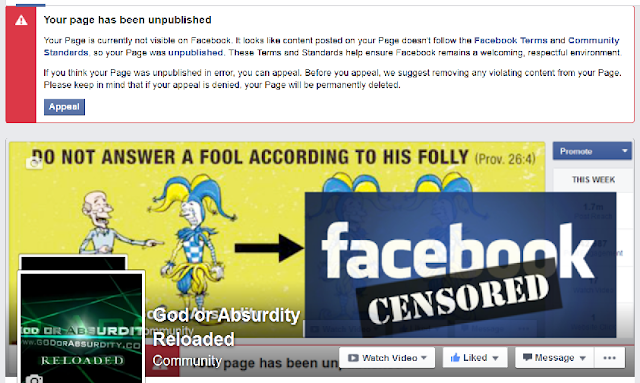 God or Absurdity Reloaded has been unpublished. The whole page is down, and it looks like it will be permanent if what happened to our previous page is anything to go by.

I've appealed the decision, but I don't like our chances, so from now on we'll be using our other Facebook page God or Absurdity Revolutions. (Also make sure to sign up to this blog by email if you don't want to miss anything or get left behind if our new page gets shut down too.)

The God or Absurdity Reloaded page was unpublished earlier today for this post: 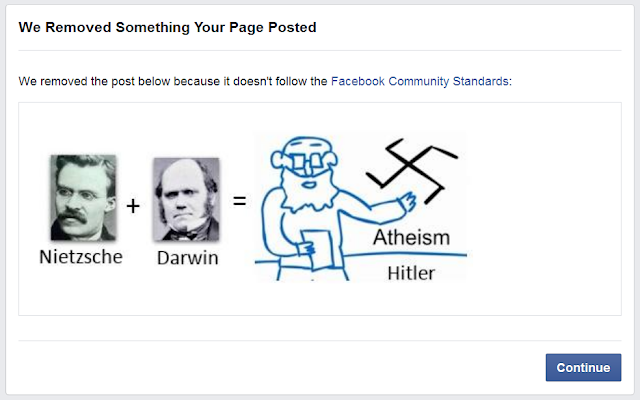 Exactly how this post doesn't follow the "Facebook Community Standards" is unclear, and we weren't told. Did Nietzsche and Darwin's philosophies help pave the way for a rise in atheism and to Hitler and Nazism? I believe the answer to that is a definite yes. (See for example here and here). Are all atheists like Hitler? No - of course not. But atheism can contribute to a person doing evil things - if you think that there is no God to be accountable then why not?

While some people might find the meme offensive - so what? If we can't talk about things that people may find offensive merely because people find them offensive then this can lead to oppression and tyranny. 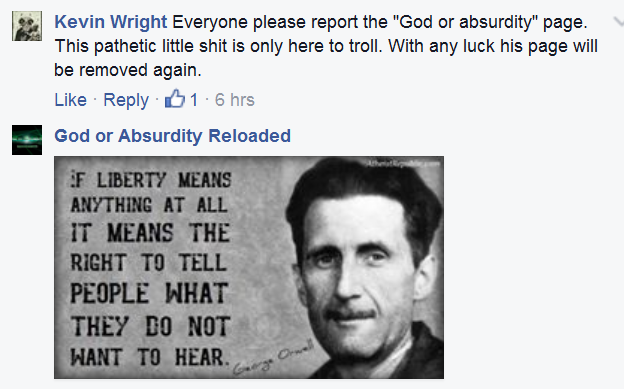 This shows the mentality of what we're up against, and I believe that there have been many professed atheists like Kevin that have been trolling our page because they're offended - offended ultimately not by what we're saying but by the fact that we are confronting them with the truth that exposes the lies they're believing. 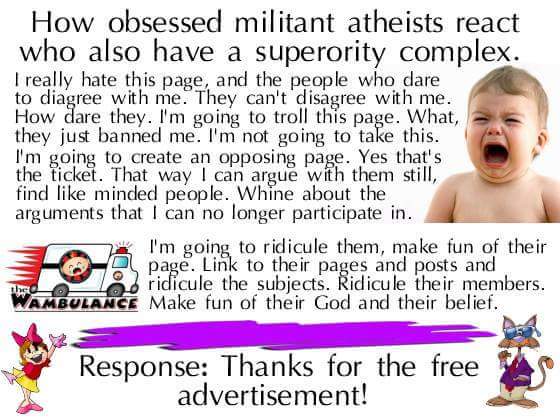 As an example of that, take the picture that was posted on Atheist Republic's page the other day that had a man eating a baby like it was fried chicken. While I assume it was photoshopped it really looked like a real baby. (See my blog post on that here).

Another example of the Facebook hypocrisy here is that pages that advocate burning down churches are said to not violate their community standards. (See for example Burn the Church).


For those who aren't aware our original page was unjustly shut down several months ago. At that point we had a reach of 1.7 million and over 11,000 likes.

With the recent shut down of our second page it only had 1,376 Likes, but it was starting to grow rapidly and had picked up to a reach of 130,000 people.

Some of the atheist trolls argue that we deserve to be shut down because we ban people from our pages, but that is totally different. When people get banned from our page they can go elsewhere and voice their opinions. They can even start their own page if they want (as many have done - there are now many pages that are spin offs from our page that mock us such as Zod or Absurdity, and God is Absurdity.) Also Facebook admins get paid to do their job of working as admins - but we do this ministry as volunteers, and while a few generous people have given donations to this ministry at the moment it barely covers costs and doesn't even begin to reimburse us for the time we put in to it.

The bottom line is - we will press on. We aren't going to abandon Facebook. We will keep trying to be a voice for truth as long as we can on Facebook because that is where the most people are. And ultimately I believe that all of this will backfire on those reporting us and taking us down, because the truth will not remain hidden.

What do you think about all of this? Comment below (I'll turn off comment moderation for now and see how it goes).