Book Review - Who Made Truth? Kids Can Prove God Exists 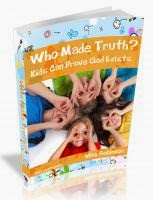 Who Made Truth? Kids Can Prove God Exists, by Mike Robinson, is a brilliant book, that I recommend for anyone interested in having a better grasp of how to defend the Christian faith using presuppositional apologetics, and of course for parents wanting to strengthen the faith of their kids.

If anyone thinks that presuppositional apologetics is too difficult for the average person, they should read this book! Even kids can understand and use it!

I loved the Van Til analogy in the book of the man who thinks his house has no concrete foundation because he can't see it, but can only see the wooden floor - likewise atheists think they aren't reliant on God as their foundation for knowledge and logic because they can't see God - but without him they would not be able to know anything.

The section in the book on self-refuting arguments was also really useful.


The only thing I think the book could really do with is some illustrative artwork. Other than that it's a great little book (46 pages). I picked up a few new ideas and it gave me more ideas about putting terminology into language that kids can understand. It does still use a few technical words, that younger kids would struggle with, but most of those more difficult words are accompanied by simpler words in brackets.

Mike Robinson's blog is God Does Exist: All Know it ( www.goddoesexistallknowit.blogspot.co.nz/.)

Posted by Unknown at 7:13 PM No comments: 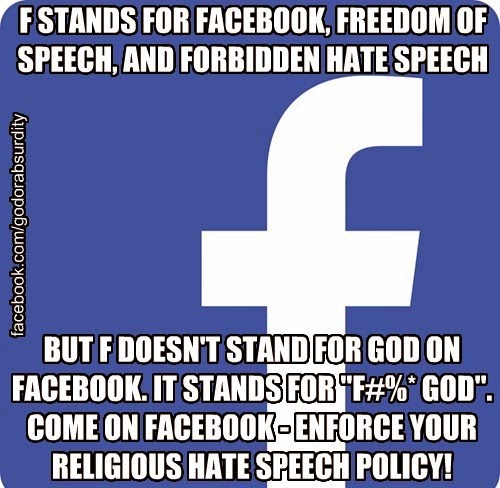 Update: 'Virgin Mary Should've Aborted' has been taken down by Facebook! Hopefully it stays down! (Friday 23 May 2014)

2nd update: After nearly a week with the page down, VMSA is back. Facebook's hypocrisy continues. (Thursday 29 May 2014)

I’ve been involved with keeping a Facebook page (www.facebook.com/godorabsurdity) for a few months now, and over the last few months it’s come to my attention that there are a lot of professed atheists online who love to make offensive pages attacking God and Christianity. There are also some pages attacking Islam and Muhammed, but those have less ‘likes’ and seem to be less frequently updated.

Actually it was “Lucy Fur” (a veiled reference to Lucifer) on a Google+ discussion a few weeks ago that first told me about the page ‘Virgin Mary Should’ve Aborted’ (VMSA). I’d never heard of it until then and when I checked it out I was totally shocked. (See my blog post on VMSA here). I reported the page to Facebook and encouraged others to do the same. I also found that others online have been protesting against this group for quite a long time, and actually managed to get the page taken down, but then not long after Facebook allowed it to go up again.

A few days ago we had a small victory, when Facebook reviewed the page ‘Virgin Mary STILL Should’ve Aborted’, and took it down. This page had over 2,500 likes, and was the backup page for ‘Virgin Mary Should’ve Aborted’.  Hopefully the page stays down and this is the beginning of the end for such pages, but given the liberal nature of the staff at Facebook, and the fact that Mark Zuckerberg is a professed atheist, there are no guarantees.

It’s all very well to want freedom of speech. But there are limits in all societies to what can and can’t be said. So the question is on where to draw the line, and whether or not Facebook will actually take their own policies seriously.

Another issue is that freedom of speech is a Christian concept related to human rights. Human rights make sense in the Christian worldview, but not without God. If people want to protest against Christianity, then I support their right to do that, but to do so in such a way as to deliberately cause as much offense as possible is going too far and clearly violates Facebook's policies.

Here are some of the relevant Facebook policies set out in their “Community Standards”:

Hate Speech: “Facebook does not permit hate speech… we do not permit individuals or groups to attack others based on their race, ethnicity, national origin, religion…”

Graphic Content: “graphic images shared for sadistic effect or to celebrate or glorify violence have no place on our site.”

However, Facebook has no problem with the following sites (I’ve censored the F word and included the current number of ‘likes’ for each page):

1. Virgin Mary Should’ve Aborted (includes a cover illustration of an aborted Jesus, Mary smoking a cigar (or is it marijuana?), and Mary saying F*** as she looks at her pregnant stomach). (11,882 likes) 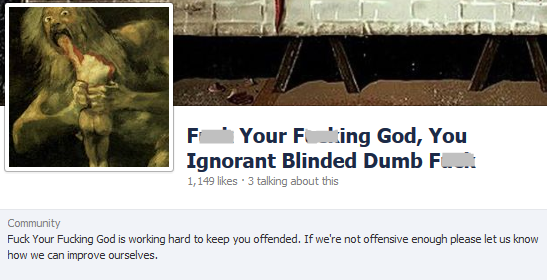 2. F*** your f***ing God, You Ignorant Blinded Dumb F*** (includes a cover illustration of a maniacal God biting a man’s arm and head off and a disemboweled Jesus being eaten by 12 zombies at the Last Supper). (This page also says at the end of their page intro description “Now go piss on a Bible and burn down a church.”) (1,149 likes) (This is the worst page I've ever seen on Facebook - and given the serious nature of advocating criminal activity I've reported this page to the police.) 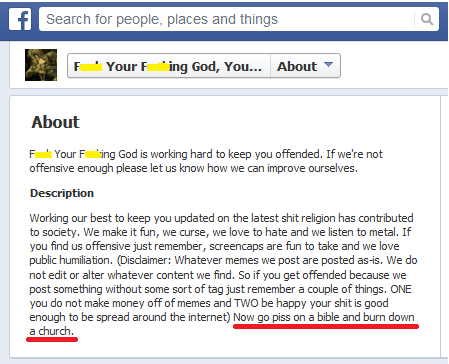 5. F*** Muhammed (includes a cover illustration of Muhammed with the words “F*** YOU PEDOPHILE MUHAMMED.”) (61 likes)

These are just a few of the disgusting pages that Facebook has no problem with, and after reporting them we are told: “We reviewed the page you reported for containing hate speech or symbols and found it doesn’t violate our community standards.”

I am aware that bringing attention to these pages increases the number of people going there and ‘liking’ the pages. However, evil triumphs when good people do nothing, and even if we can’t get these pages taken down straight away, I think that even the average non-Christian can see that these pages are deeply offensive to most people and sick. And that is what the people who run these pages are – sick. Without God, that is the kind of depravity that people can end up in, and the only hope is found in Jesus Christ.

Without God, there is no reason to try and be good, nor is there any foundation for absolute morality. As Jeffrey Dahmer (a.k.a. the Milwaukee cannibal) said: “If a person doesn’t think there is a God to be accountable to, then what’s the point of trying to modify your behavior to keep it within acceptable ranges? That’s how I thought anyway.” 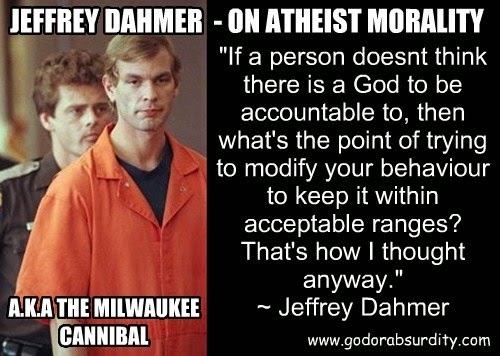 Come on Facebook – listen to the voice of your customers – because if you don’t you’re going to go down and a few years down the track when some other social media site has taken over you, you’ll sit back and wonder where it all went wrong. Maybe then you’ll remember the many Christians who protested against you that you ignored. 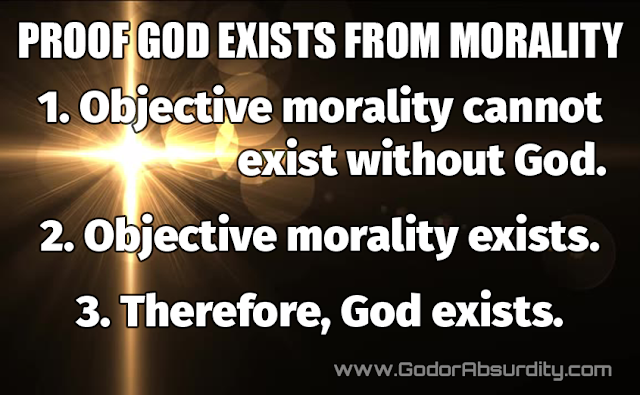 In order to try to refute this proof you have to deny objective morality, which is absurd. Watch this 3 minute video to see the absurdity of moral relativism which attempts to deny objective morality. Before commenting please take the time to watch the video, and in your comment please indicate that you've watched it, and answer this question: Yes or no - is it objectively wrong to abuse babies for fun? (**Any comments that are trying to refute the proof and don't answer this question will not be published)

Another point relating to objective morality is that everyone lives as if objective morality exists, so when professed atheists deny it with their lips, they are contradicting that with their lives - every time a professed atheist accuses a Christian of dishonesty or something else they think we SHOULD not do, they are borrowing from the Christian worldview and confirming that in their heart of hearts they DO know God.