Trinity, Tawheed, and the Unity and Diversity of God

I'm reblogging this article from Answering Muslims. It's a really good presuppositional kind of approach to dealing with the issue of the Trinity with Muslims.

Trinity, Tawheed, and the Unity and Diversity of God

Therefore, if a Muslim asks you to explain the Trinity do not start with the Trinity, instead, first establish that God, even in Islam, has both unity and diversity. Do not let a Muslim fool you by focussing only on the unity of God. Then after this, consider the Father, Son, and Spirit.
You can do this by asking how each of Allah’s many distinct attributes can all share fully in the divine essence and maintain the oneness of God?

Or, did Allah create the Qur’an? The orthodox Muslim answer is no, Allah’s word is one of his essential attributes. Therefore, there are at least two eternals, which means Allah’s unity is diverse.

Or, did Allah create his Spirit? The answer may vary from yes, no, and I don’t know. The Holy Spirit in the Qur’an is Allah’s breath through whom he gave Adam life (Q. 15:29). Allah sends his Spirit with revelation (Q. 16:102), and the Spirit comes as a man to Mary (Q. 19:17). Again, this shows a diversity in Allah that Muslims must explain.

Or, Jesus creates a living being (Q. 3:49) in exactly the same way that Allah does (Q. 38:71-75). How can Jesus share in this unique God defining attribute and maintain the unity of God?

Islamic theology believes in a unity and diversity of God, therefore, Christians must not be fooled when Muslims try to discredit the Trinity by saying the oneness of God makes any diversity impossible.

Muslims may have an explanation for their concept of God's unity and diversity, fine, so too do Christians. 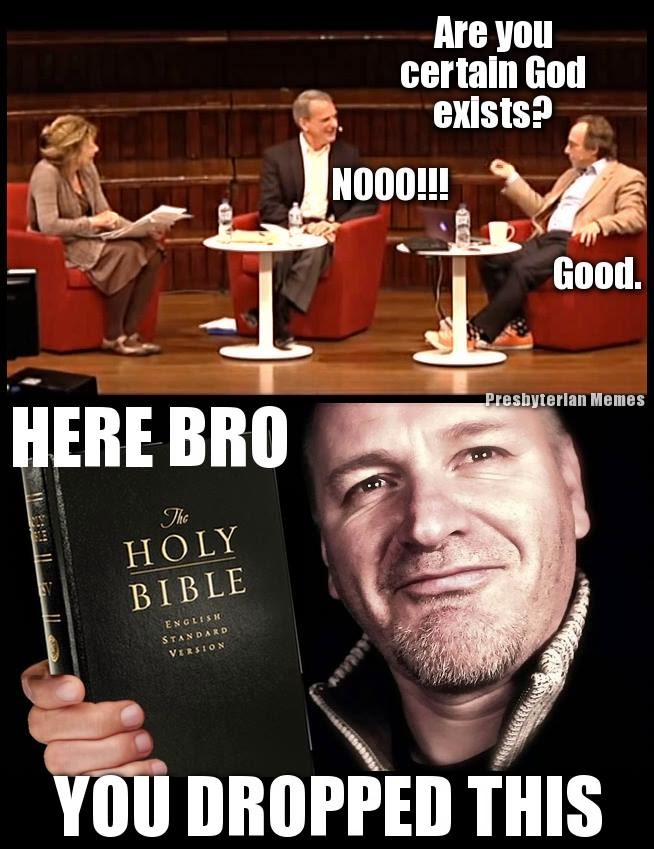 Yes, William Lane Craig (WLC) really did say that, and it hasn't been taken out of context. Here's the YouTube video debate clip where he says it: William Lane Craig says he's not Certain God Exists.
(And here is the full video of the debate.)

When I first heard this I was somewhat shocked that WLC would say this, but I wasn't totally surprised because it is consistent with his flawed apologetic method that argues for the strong probability of the existence of God rather than the certainty of the biblical God.

Nowhere in the Bible do you find apologists that look like WLC. None of the apostles ever argued for the probability of God's existence or for a generic god - they argued for the certainty of the biblical God and the fact of the death and resurrection of Jesus Christ. They didn't suggest to people that God is probably real, but proclaimed that God is real, that Jesus Christ was resurrected, and everyone must repent and put their faith in Christ. They didn't suggest to people that God might be real or that they weren't certain if God existed or not. They proclaimed the certainty of God and Christ. (For more on the certainty of Christianity and why Presuppositional Apologetics is the biblical methodology see my blog post on The Biblical Basis for Presuppositional Apologetics.)

I'm not saying that WLC is a heretic or that he isn't a Christian or anything like that. I accept that WLC has done a lot of good work defending the faith and encouraging people to take apologetics seriously. But what I am saying is that his methodology and foundation is not rooted and grounded in the Bible. I believe part of the reason for this is that he has been strongly influenced by liberalism. This can be seen in his rejection of a literal Genesis and his acceptance of secular scientific ideas of the Big Bang and billions of years. He's even gone as far as to call Young Earth Creationists an embarrassment. (For more on that see this article William Lane Craig vs creation - creation.com and this video William Lane Craig: Young Earth Creationism is Embarrassing.)

Many people put WLC on a pedestal but it's important that with any Christian we look up to that we check what they are saying and compare it to the Word of God. No Christian should be above challenge, and no Christian is ever perfect in their doctrine. I'm not attacking WLC but offering what I believe is a biblical critique on his ministry. Right doctrine is important, and we are not to put peace and harmony above truth.

The Top 10 God or Absurdity Memes


Below are the actual memes used in the video along with the approximate number of 'Likes' on Facebook. Altogether the memes have also had hundreds of 'Shares' which would push the actual total number of Likes way beyond that stated which is the Likes I've observed from my page and for the most popular ones also includes the approximate number of Likes they've had on the Facebook page 'Freedom From Atheism Foundation' (FFAF) which has shared some of my memes. The FFAF page is huge and currently has 468,000 Likes which makes it the largest anti Atheism Facebook page by far. 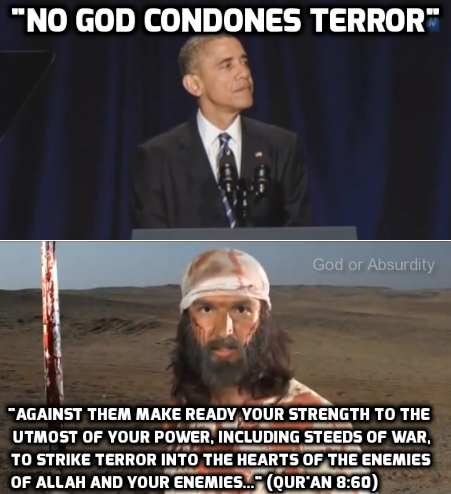 For more on Islam see my blog post 13 Doctrines of Radical Islam. 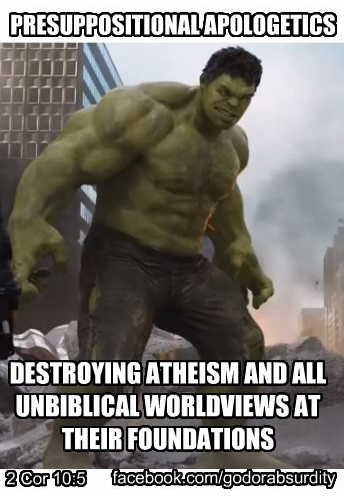 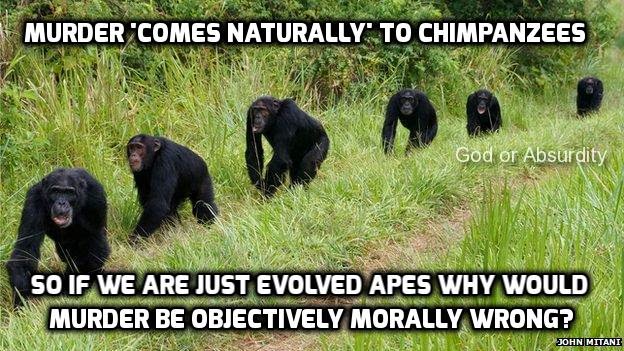 The article that inspired this meme is BBC News - Murder 'comes naturally' to Chimpanzees.
I don't believe in evolution, but I'm showing the absurdity of the evolutionary worldview. 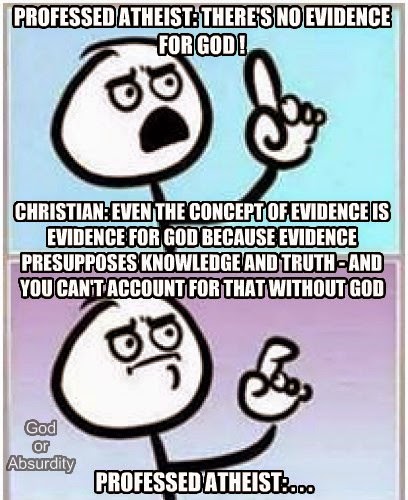 If you don't get this meme then take time to go through my website www.godorabsurdity.com. 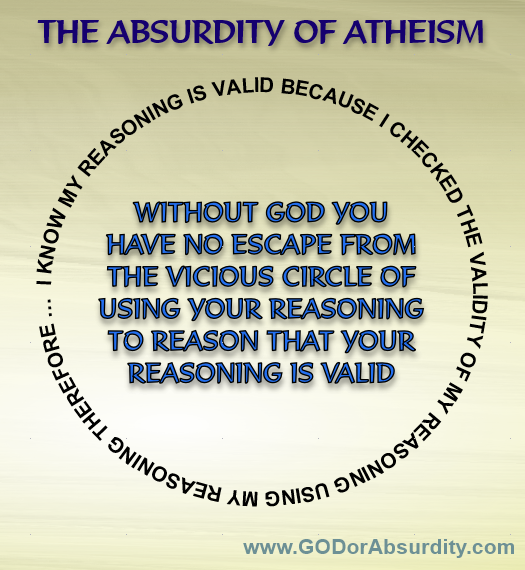 This is a key part of the Presuppositional argument. Without God unbelievers are stuck in this viciously circular dilemma. For more on circularity see my blog post Circular Reasoning?. 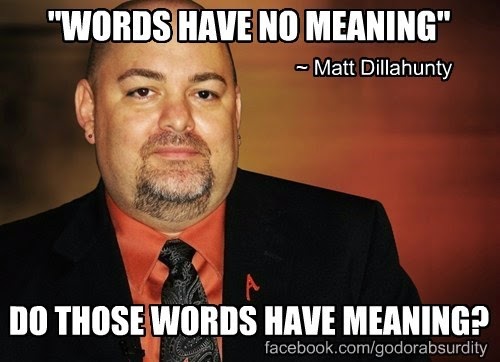 This quote is from the Refining Reason Debate between Matt Dillahunty and Sye Ten Bruggencate.
And yes, he really did say this. You can check for yourself the full context in the debate @ 1:02:00 where Matt said, "Well, first of all the sounds don't have meaning. Words don't have meanings, they have usages." but adding that they only have usages doesn't get him out of the self-refuting hole he's created for himself by saying words don't have meanings. And then @ 1:20:18 a questioner from the audience says, "I'm going to use words even though apparently they have no meaning [audience laughs]" to which Matt says, "They don't". (For more on the Sye vs Matt debate see my blog post Sye / Matt Debate - Why Are Both Sides Claiming Victory?)

The philosophy behind this absurd belief is known as deconstructionism and it's become quite popular in academic circles these days and even has infected liberal theologians. It's an extension of a worldview that rejects the existence of God and absolute truth. (For more on this see Deconstructionism - is it a valid way to interpret the Bible? and The Deconstructionist Agenda Exposed.) 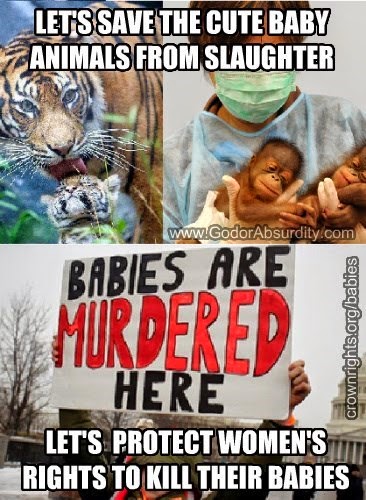 You can watch the full Babies are Murdered Here film on YouTube. 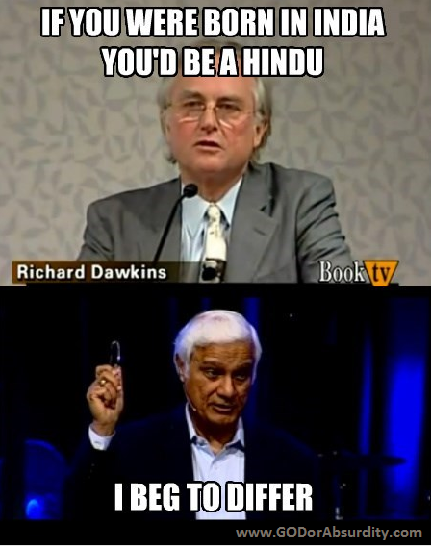 Ravi Zacharias is an inspirational Christian speaker who was born and grew up in India. This meme was inspired by a YouTube video I watched by James White called 'The insulting Richard Dawkins'. It's hard to beat Jack Nickolson for an insane looking person. This meme uses a presuppositional transcendental argument. Without God there is no way to know or justify that you aren't insane. You also can't show that we all aren't insane, as without God there is no objective standard to measure against. As CS Lewis said - you can't know what crooked is if you don't know what straight is. 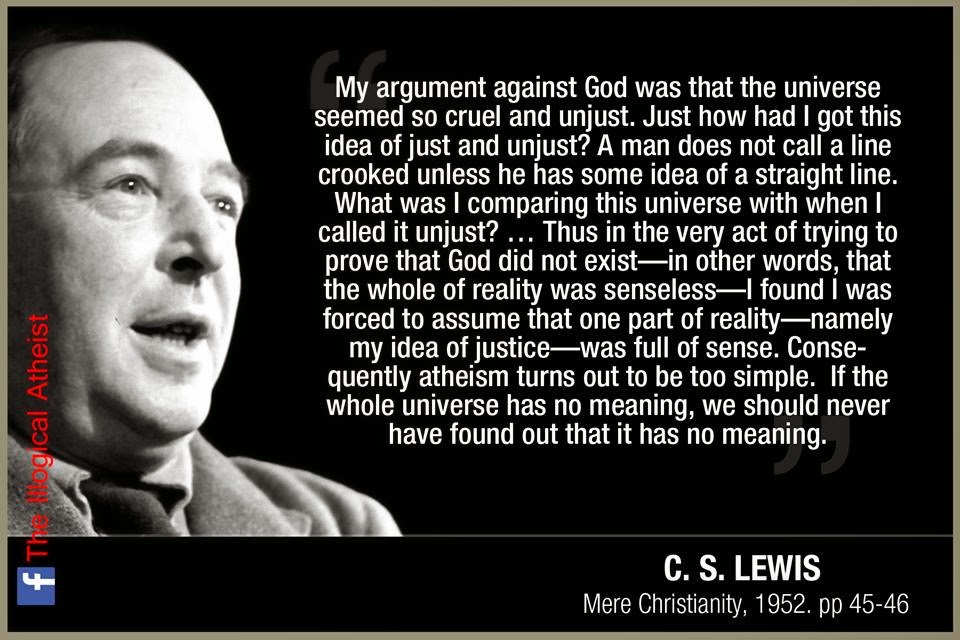 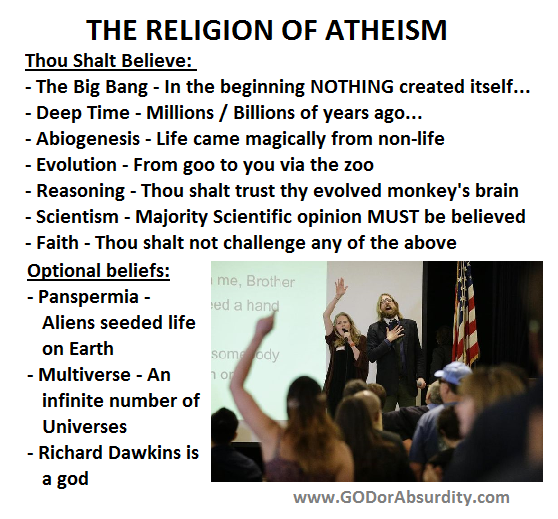 This meme caused a huge stir on Facebook when I first made it and posted it and it has been viewed by over 110,000 people according to my Facebook page stats. That's from my God or Absurdity page alone. Given that quite a few atheist pages and groups shared this meme, as well as the FFAF page, it's quite possible that this meme has been seen by half a million people already. (Remembering that FFAF has almost half a million followers and that even if only a small percentage shared the meme it exponentially increases the number of viewers).

Atheists were going nuts over this meme and we had a huge wave of hundreds of trolls invade our page mocking God and swearing and complaining about the meme being wrong - but when challenged as to exactly how it's wrong no one could really make their case. Here's one response shared on an atheist group. (It had the whole meme but I've cut the bottom off in the screenshot). 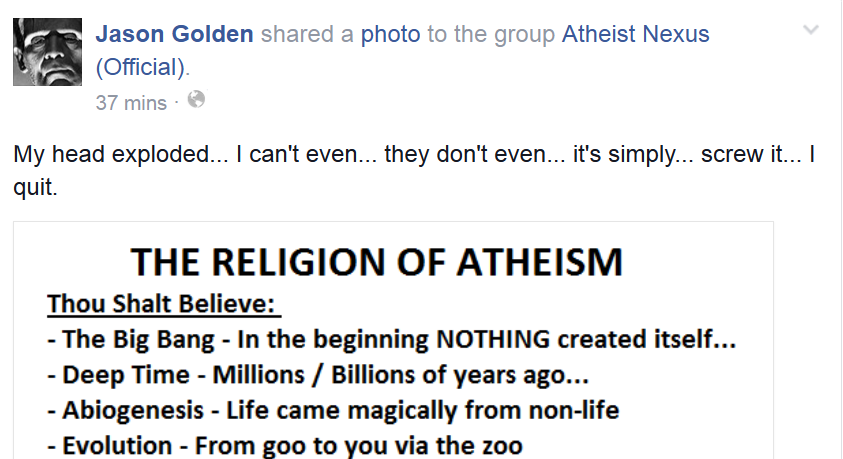 The meme was inspired by a blog post I read by Ken Ham about how atheism and evolution are really religious ideologies. Christians loved it and professed atheists hated it. Atheists are loathe to admit that their worldview is a religion, despite it ticking nearly all of the boxes for a religion. They want the creation vs evolution debate to be framed as religion vs science, but in reality it's one religion against another - the Christian creationist worldview vs the secular humanist evolutionary worldview. This has huge implications for issues like religion in school and what is taught and how it's taught. At the moment public schools around the world usually present evolution and millions of years dogma as if they are scientific facts, and they will not allow Intelligent Design or Creation to be taught because that is seen as being religious and unscientific, which really isn't the case at all.

Thanks for reading. Please share my memes and the video I made here and help get the truth out to a dark world that needs to know the truth. While these memes don't share the gospel themselves they do "sow seeds" in peoples hearts that get them thinking about Christianity and they create conversations where we are then able to share the gospel with people. As Christians we are called to be salt and light in the world, and Memes and social media are a great way to be an influence for God. Internet Evangelism is a powerful tool and amazing opportunity to reach people.

UPDATE (12 October 2015):  Since I made this blog there have been several memes that would put them into the top 10 list. 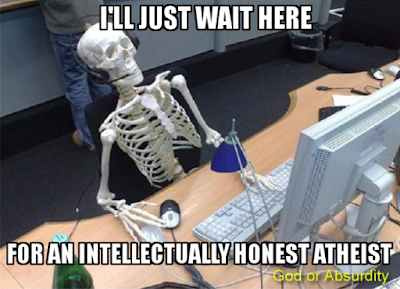 Number 6 in updated list: An angel from heaven (250 likes) 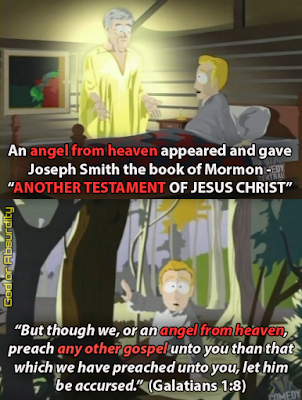 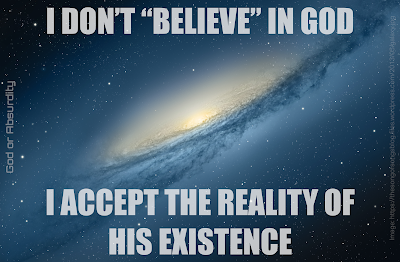 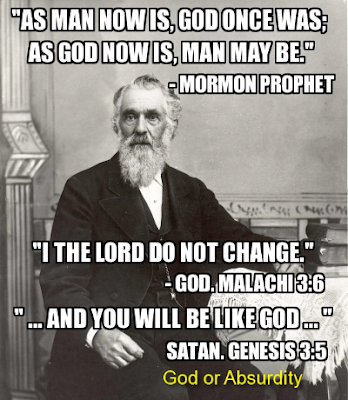