The Illogical Reaper Video Reviews My Website And His Brain Explodes

"The Illogical Reaper" is a professed atheist and gamer who thinks he knows a thing or two. Recently he's taken to making some video reviews mocking Christian websites and Facebook pages. His video review just made me laugh repeatedly as I listened in amazement at the level of folly it takes to deny the God that he knows exists but is in denial about. Laughing like a hyena and saying, "This is f-#@$ing stupid" is not a refutation. Nor is waffling about irrelevant things anything more than an example of the fallacy of irrelevant thesis. (Which is what his attempt to get around the problem of reasoning that his reasoning is valid amounts to.) My suggestion is that he spend less time playing video games and more time thinking seriously about the deeper issues of life before he goes and makes videos like the one he has made. (That's if he wants to be taken seriously.)

He begins his review by saying:
"This is another website I found while browsing around. Apparently there's a God or Absurdity website and if you don't know what God or Absurdity is it's basically like this weird Facebook thing that basically takes presuppositional apologetics to a whole new level..." 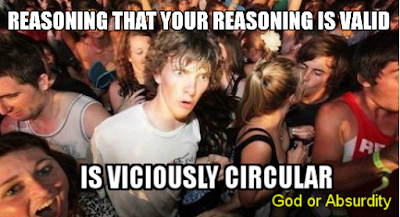 (Warning - the video below contains some swearing as a professed atheist's brain explodes from being confronted with the sheer weight of contradictions and absurdity in his worldview.)

Questions / Comments From The Illogical Reaper:

- How do you know God's not lying to you?

If he could you couldn't make sense of your question. (See The Deceptive God Argument Refuted)

- How do you know that's the case? (That without God you can't know anything).

That's exactly what the website goes through and shows. But in short I know that is the case because if you reject God you can't even make sense of your question.

- I know I'm not omniscient

No, you can't even know that without God. I explained it carefully on the website page but you didn't read it properly and were too busy mocking.

- Why does reasoning need to be validated?

Because if you can't validate how you know you aren't insane then you have no basis for knowing anything.

- I'm alive, so that should be enough.

No, it isn't because it doesn't show how anything you claim to know is true. You'd realise this if you thought more about it and actually carefully read the website's page 'I know I exist' instead of just laughing and swearing. And as I point out there, even if I were to grant that you know you exist, so what? Where do you go from there in terms of actually knowing anything about truth in terms of how reality actually is? To say I'm alive, so that should be enough is absurd. It's like a man who is the only survivor from a terrible plane crash who walks out of the burning rubble of the crashed plane and is interviewed by a news reporter. When asked by the reporter how he survived, the man says, "Well if I hadn't survived I wouldn't be here talking to you now would I!"
That's an example of the fallacy of irrelevant thesis, and it's what non-Christians are doing when they say that if their reasoning wasn't valid then they wouldn't be alive talking with you or wouldn't be able to know anything. It takes valid reasoning to know you've got valid reasoning.

- How is God benevolent when he allowed Adam and Eve to Sin?

Because he gave us free will and didn't just create us as robots who would be slaves.

- How do you know that it's the God of the Bible?

Because there are no other gods. (See 'What About Other Gods?') 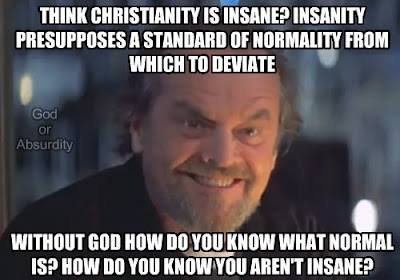 Posted by Unknown at 8:04 PM No comments: