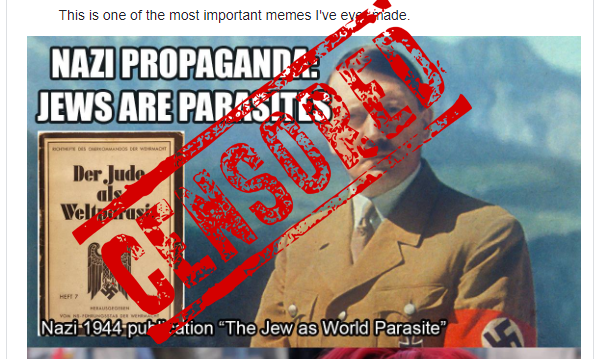 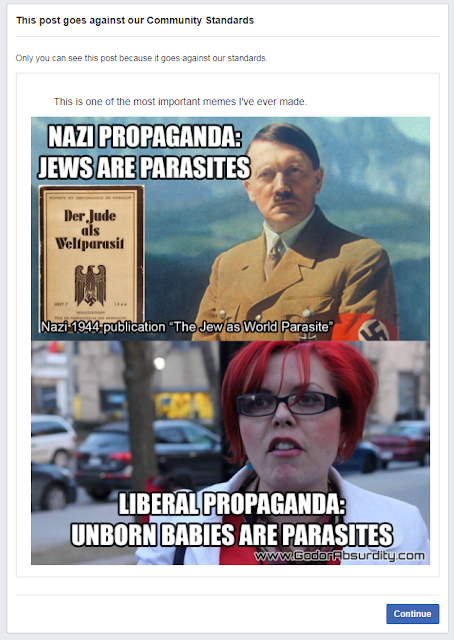 It was removed today, along with giving me another 30 day ban:

They also once again said that the God or Absurdity Online facebook page has been unpublished:

However despite this warning the page does not seem to have been unpublished.

This is the 41st time facebook have censored me for things I've posted on God or Absurdity. (See here for all 41 of the censored and removed posts).

The meme that was removed is a very important one, because it counters the common argument from pro-aborts that a fetus is just a parasite.

I made it after repeatedly encountering that terrible argument, and after I discovered that the Nazis official propaganda actually called Jews parasites.

The book on the left of the meme is this one: 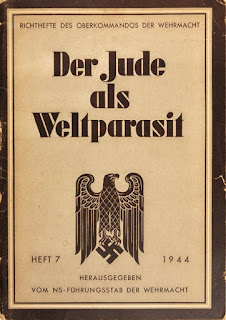 It's title 'Der Jude als Weltparasit', means 'The Jew as World Parasite'. It was published in 1944 by the Nazi party, and as you can imagine from the title it's incredibly anti-Semitic, and outlines the racist Nazi ideology that tried to justify the extermination of the Jews. Here's one quote from the book to give you an idea of what it's about: "the Führer repeatedly said that the Jew was a parasite."
(For more on this book see here).

To make things explicitly clear - I'm totally against Nazism. That should be clear enough from the meme which uses the word propaganda.

I'm also totally against abortion (I'm an abolitionist, which is very different from being a pro-lifer. Abolitionists call for the total abolition of abortion, whereas being pro-life is usually just a moral opinion that abortion is wrong. (See this article for the differences between pro-life and abolition.)

Another thing is that the idea that babies in the womb are just parasites is absurdly false: 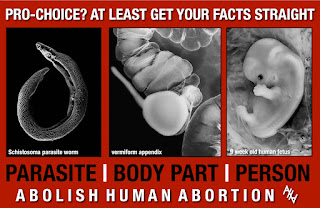 It's absurd that facebook have censored this meme, as the meme is trying to show the absurdity of those who argue for abortion - and the links that it has with the Nazi ideology that led to the Nazi holocaust. Abortion is a holocaust, and without God there would be no objective basis for morality by which to say that any killing is morally wrong. The fact that every sane person recoils at the thought of the Nazi holocaust is because everyone knows in their heart of hearts that God exists and that morality exists.

The censorship that is happening increasingly on facebook against those who speak out against evil is disturbing, but we must continue to speak the truth. To help counter the censoring please share this blog post, subscribe to the blog, and make sure to like the backup page for God or Absurdity at God or Absurdity Resurrected. 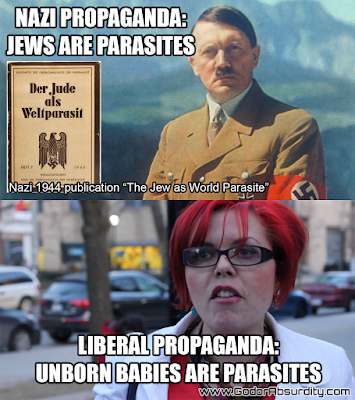 Posted by Unknown at 2:19 PM No comments: